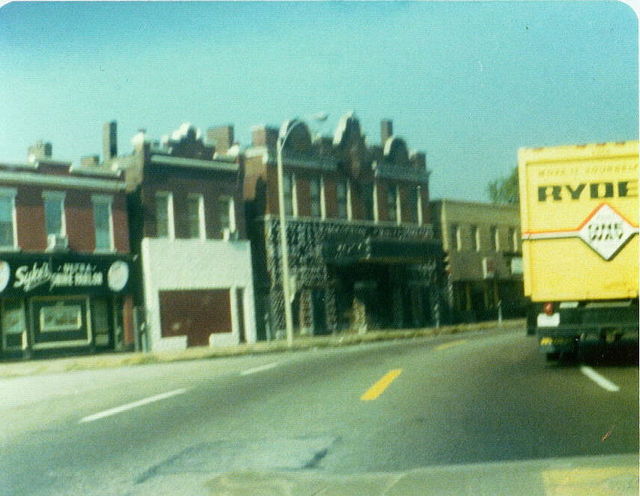 Opened in 1910 as the O'Fallon Park Theatre. It was renamed O'Fallon Theatre in 1923. It was located just seven blocks from the much larger Tower Theatre. It was never part of a chain and was operated by the Kaimann family who owned and operated several other St. Louis theatres.

Both the exterior and interior had a French atmosphere and the theatre was rather ornamental. Two small towers rose above the marquee. The O'Fallon had a small balcony and the inner walls of the auditorium were divided with columns and french paintings lined the walls between each column. Plush red velvet draperies over the stage and screen. Three aisled auditorium, with two side aisles and a center aisle.

The O'Fallon Theatre, along with the Norside Theatre and Tower Theatre, were victims of television and the changing demographics of their neighborhood and the O'Fallon Theatre closed as a movie theatre in 1959. It later became a church and has since been demolished.

In January 1944 theatre was the scene of a family dispute resulting in a shooting in a basement office and a subsequent suicide.

As the story was told to me by my grandma, the shooting occurred in O'Fallon Park, but as I only have family history and no documentation, I’ll file this as a possibility until I can do more research on my own.

My grandfather was William Kaimann; his widow was my grandma, with whom my mom, my sister, and I lived until grandma’s death at the age of 97.

The story I was told was that my grandfather Will discovered his brother Clarence was embezzling money from the family business, Kaimann Amusement Co. They drove to O'Fallon Park, where my grandfather confronted Clarence, shot him, and then turned the gun on himself. Clarence survived; Will died the following day, two days before his 53rd birthday.

This is the first time I’ve heard that the events took place in one of their theaters, but it actually makes more sense than the drive out to the park. I would love to get hold of the newspaper articles from that time, just to be able to clear up my own family history.

The shooting and suicide did indeed take place in O'Fallon Park, as per my grandfather’s death certificate.

According to newspaper accounts, the shooting took place in the basement office of the O'Fallon Theatre. The subsequent suicide took place in a car in O'Fallon Park. This was reported in all three dailies, the Post-Dispatch, the Globe-Democrat and the Star-Times of Jan. 27, 1944. I can vouch that these newspapers are available on microfilm at the downtown St. Louis library.

Thank you JAlex. My Grandma passed in 1989, so I never was able to get more of the story than what she had told us when we were younger. Thanks also for the microfilm info. I’ll definitely be checking that out.

The O'Fallon and the Tower (formerly the Florissant)were my childhood places of escape. That was in the late 1940s. I got a munificent weekly allowance of 20 cents. Half of that paid for admission to the O'Fallon. With the other half I had to make a painful choice between Chuckles (my favorite candy – in the darkened theater, I would mix up the five pieces and then try to identify them by taste alone) or a comic book. It was my first experience angst.

I also remember the New Year’s Eve programming of the big Grand Avenue theaters which, typically, consisted of five first run movies. The movies alone had to account for 7 or 8 hours of time. Then you could count on at least an hour-and-a-half of cartoons, newsreels, short subjects and coming attractions. This was followed by a streetcar ride to the White Water Tower where the motorman would intone, “End of the world. Everybody off.”

The theatre opened as the O'FALLON PARK in 1910. The building permit lists the architect as G. Becker. The theatre’s name became the O'FALLON around 1923.

Here’s a video from inside the Bremen Theater which was owned by the same family!