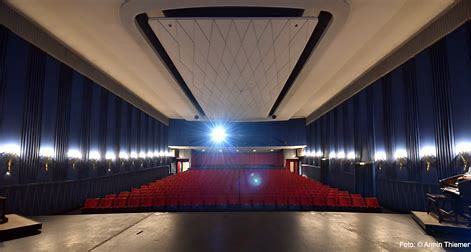 Located in the Huttrop district to the southeast of Essen. The Filmtheater am Schwanenbusch was opened in 1955 with 600-seats. It was designed by architects Carl Uhlendahl based in Essen & Hanns Ruettgers based in Dusseldorf. Carl Uhlendahl Filmtheaterbetriebe GmbH operated the cinema. The seats were by Loeffeler and the size of the screen was 100 metres wide. The AP XII projectors were by Askania. The theatre contains a twin console Wurlitzer organ.

In 1956 the cinema was re-named Eulenspiegel Filmtheater. Later projectors capable of screening 70mm were added and a 6-cahnnel stereophonic sound system was installed. Later the seating capacity was reduced to 400-seats. Essener Filmkunsttheater now operate the cinema. It retains its 35mm & 70mm projectors as well as digital. It is listed as a monument.