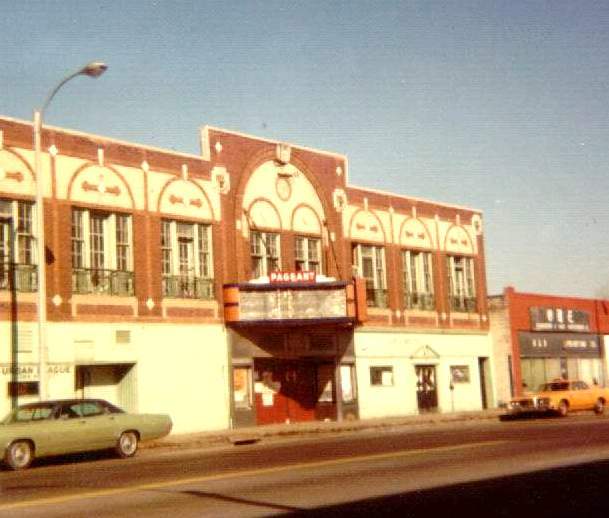 The Pageant Theatre was opened on September 18, 1915 seating 1,400. It was actually the first stadium style theatre built in the St. Louis area. It was remodeled in 1921 to the plans of architect H. Alexander Drake. In 1939, the theatre was remodeled and seating reduced to 990 (and later reduced once again to 907).

It had a narrow entrance with a large vertical above the marquee. You went around the lobby to enter the theatre and when you came into the theatre you were actually in the middle of the auditorium, to your right you had to go up the steps to seating and to the left down the steps. There was a center aisle through the middle that took you to the other side of the auditorium.

The Pageant Theatre did a lot of road shows and reserved seat engagements. It was located just a short distance from the DeBallivere area and a few blocks from the University City Loop where the Tivoli Theatre and Varsity Theatre were located. With the decline in the neighborhood the Pageant Theatre closed in January 1968 and was briefly turned into a concert venue. It was demolished in 1975.

Yes, it was the Pageant that had the Disney “Sleeping Beauty."
The run was from June 12 to September 17. Admission=$1.50.

Thanks, JAlex. I have another St. Louis question, so if you see this message, please contact me (email is in my profile).

Did the Pageant Theater premier the movie, ‘Around the World in 80 Days’ in 1956?

cdrosenblatt: As the house was equipped for Todd-AO, the Pageant might have had the Saint Louis premier of Around the World in 80 Days, but the world premier was at the Rivoli Theatre in New York City on October 17, 1956. The movie opened in Los Angeles on December 22, at the Carthay Circle Theatre. It probably would not have reached St. Louis until after it opened in Los Angeles, so if the Pageant ran it, it might not have shown there until early 1957.

In his book The Death of Black Radio, Bernie J. Hayes says that for over a year around 1966-1967 he operated the Pageant Theatre, under a lease from the Arthur brothers, as a concert venue for R&B acts.

Although the old Pageant Theatre is gone, its name lives on in The Pageant, a modern concert venue opened at 6161 Delmar Boulevard in 2000.

“80 Days” had its first-run at the Esquire in 1957…and not in Todd-AO. The Pageant was the first St. Louis house with Todd-AO capability, but not until 1958.

And right next store to the Pageant they served the best fried chicken in the city. It was called Golden Fried Chicken. A great evening: fried chicken, followed by a western at the Pageant on Friday nights.

I just wanted to correct the statement that the Pageant closed in 1965. In early 1966 the owners tried to turn it into an “art” theater. They had “The Gospel According to St. Matthew” and “The Shop on Main Street” and maybe some others. The neighborhood had declined and the whole idea was doomed. As stated above, later in 1966 the theater became a concert venue. That also didn’t last long and that was the end of the theater.

The last ad I’ve seen for the Pageant was that of January 7, 1968, a double bill of “The Hills Ran Red” and “Island of Terror.” A demolition permit for the structure was issued in 1975.

In 1921 the Pageant was remodeled for Charles Skouras, the project being noted in the December 18, 1920, issue of The American Contractor. Plans for the $35,000 project were drawn by Kansas City architect H. Alexander Drake.