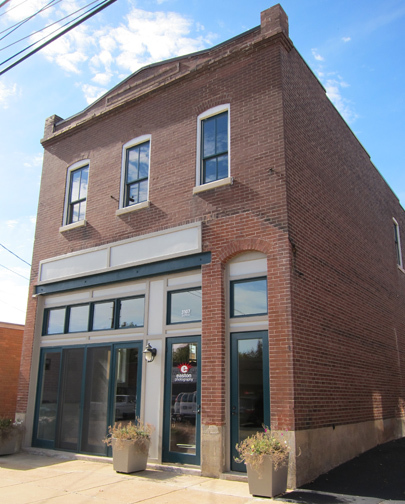 The Powhatan Theatre was located on Sutton Boulevard between Elm Street and James Street. It was opened May 4, 1913 and seated 566. It was an indoor and outdoor theatre. The outdoor screen was used in summer, because the theatre was not air conditioned. The outdoor part was all gravel and people brought their own chairs. Parents would also bring their children in wagons to watch the show. It was built by the Franchon & Marco Theatres and later became an Arthur Theatre.

This was a single floor neighborhood house that served a densely populated area. Rather a plain theatre with a small lobby and single aisle down the center of the auditorium. Even after the Maplewood Theatre opened the Powhatan Theatre did well until television and then attendance fell and all attention was given to the bigger sister theatre the Maplewood Theatre.

At the end, the same manager operated both theatres since they faced each other across the bus turnaround. The Powhatan Theatre closed in 1949, and was demolished in 1965.

Correct address of Powhatan was 3111 Sutton and was not near the City Limits loop which was across from the Maplewood.

Earliest reference I have found was in the 1915 Maplewood City Directory.

Theatre built by W. B. Powhatan.

An airdome was adjacent to the theatre which was one of the last to operate in the St. Louis area.

Theatre closed in the early 50s, and a supermarket was erected on the site.

Further research finds closing date of theatre to be November 27, 1949.

I have info that my relative Alois L. Krodiger built this theatre. He was owner of the A.L. Krodinger Real Estate Company.

Theatre met its ultimate demise with two “suspicious” fires in April 1956. As noted above, theatre had sat unused since 1949.

The Powhatan Theater is listed at 3107 Sutton according to the 1912 Maplewood Business directory. The building survives. The joist pockets for the sloping floor have recently been revealed during an ongoing renovation. The Directory also lists the Maplewood Theater at 7320 Manchester and adds (W.B.Powhatan) after the listing. I assume this is the owner. 7320 Manchester is now home to Scheidt Hardware from 1916 to present. The building was home to the Lyric Theater prior to being named the Maplewood Theater. The Maplewood Theater later moved to the address in the 7100 block probably in the 1920’s. Doug Houser Maplewood Historic Preservation Corporation

I’m wondering if anyone remembered an Indian bust located somewhere in the theater? I have an Indian bust that my dad said came from an old theater in St. Louis. After my dad aquired it, he had it displayed in Carson Pontiac’s showroom on Manchester Rd.

I haven’t heard of an Indian bust in connection with the Powhatan Theater but the name would make you think it could have been. If possible e mail me a photo and I’ll ask some of the old timers if they recall anything about an Indian bust. It’s possible an image may exist in an advertisement that could directly connect it to the Powhatan. Doug Houser

Someone needs to edit the Powhatan Theater text to show that the building was not demolished. The correct address is 3107 Sutton just as it was listed in the 1912 Maplewood business directory. The 3111 address may have been the location of the Air Dome though I’ve not yet found that address used in my research.

Boxoffice of May 5, 1956, reported that a fire had damaged the long-closed Powhattan Theatre in Maplewood on Friday, April 27. This item, like several other sources, gives the address as 3111 Sutton. I suspect that there might have been more than one Powhatan Theatre on this block, the one at 3111 replacing the older one at 3107.