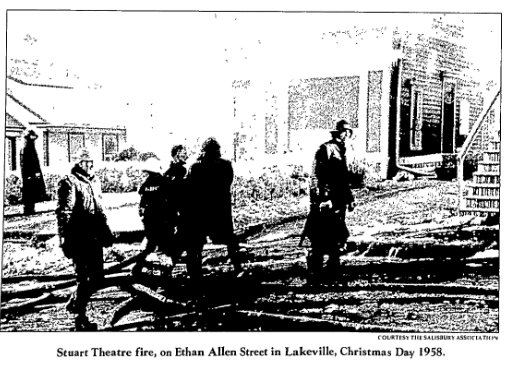 The Best Theatre was located on the 2nd floor of a wooden building. It was opened in 1916. In 1927 it was renamed Stuart Theatre. By 1950 it was operated by Liggett-Florin Booking Service. It was still open in 1957 when it was destroyed by fire.

Happened to run across this on a search. Per page 18 in the below link.

“Somewhere around 1928 we had the first sound movie in Lakeville at the Stuart Theater. I went with Mother and Dad to see (and hear) Al Jolson in The Jazz Singer. The movie was on conventional film, but the sound wasn’t on a sound track on the film the way it is now. It was on a Victrola record that was supposed to synchronize with the movie – it didn’t. I used to go to the movies there until the Stuart was destroyed in the disastrous fire at Christmas time.” John Rudd

Uploaded a 1910 image of the Lakeville, CT Rail Road Station and adjacent buildings. The large white wooden building to the right (on what would be considered Ethan Allen Street) housed an A & P Supermarket on the ground floor and a theatre on the second. At the time of the photo the theatre was called the Best. It became the Stuart in 1927.

A piece I found in the local newspaper, with photo, says that the Stuart Theatre burned down on Christmas Day in 1958 and that its address was on Ethan Allen Street.

Article in the Lakeville Journal of February 18, 1960 on the origins of and rivalry between the two Lakeville theatres: Roberts Hall and Best (later called Stuart). “2 MACHINES, CONTINUOUS PROJECTION.” http://scoville.advantage-preservation.com/viewer/?k=%22roberts%20hall%22&i=f&d=01011871-12312019&m=between&ord=k1&fn=lakeville_journal_usa_connecticut_lakeville_19600218_english_4&df=71&dt=80