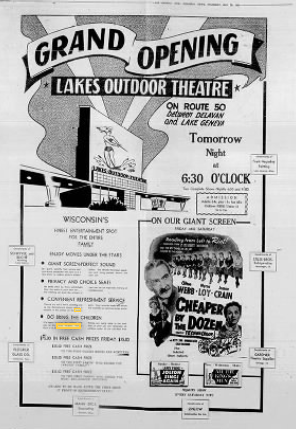 Located between Lake Geneva and Delavan (West of Williams Bay). The Lakes Outdoor Theatre was constructed by the ZinZow Construction Company Inc. and opened its gates on May 25, 1950 with the 20th Century Fox smash hit “Cheaper By The Dozen”, followed by “Jolson Sings Again” and “All The King’s Men”. Days later (Compliments that advertise the Lakes Outdoor Theatre were by a couple of companies in the Janesville, Elkhorn, Delavan, Lake Geneva, Wisconsin; Chicago and Waukegan, Illinois Areas). It was owned and operated by Bob Hagen, who was the manager for many years. The Lakes Outdoor Theatre only operated during the months from late-March (or April) to late-October.

As of 1980, Williams Matthews operated the Lakes Outdoor Theatre, who was the son of Mr. & Mrs. Donald Matthews.

On June 2, 1981, over 595 Hamburgers, 184 Hot Dogs,two and a half dozen hamburger buns, 22 Pizzas, and several cases of assorted candies were stolen during a robbery at the Lakes Outdoor Theatre, along with a couple of cigars, change from a vending machine, VHS tapes and audio cassette tapes. “The value of merchandise have not been determined”, said Lake Geneva Police.

Now “East Delavan Baptist Church” has been built on the site.

The drive-in sat on the east side of Theatre Road just south of the WI-50/Theatre Rd intersection. A 1981 aerial shows it intact and operational. A 1995 aerial shows it demolished.

Today, U Stuff It Mini Storage (catchy name) sits on the property. You can clearly see the outline of the drive-in along with the entrance road.

The name on the street sign is “Compost Management” which may be the actual name of the business since the overhead does not show any recognizable storage units.

Yes, You Are Right. The Pathway Is Clearly Visible There. A “U Stuff It Mini Storage” Is Now On Its Site. Thanks Kenmore!