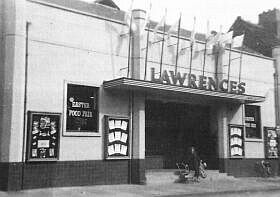 Located in Hinckley, Leicestershire. The building that was to become the Palladium Cinema was built in 1820 as a Free or National School by the “Great Feoffment”, the principal charity in Hinckley. From 1877 to 1894 it housed the grammar school, and then it became the drill hall of the Volunteer Battalion of the Leicestershire Regiment.

In 1911, shortly before becoming a cinema, it was hosting amateur musical shows and drama; by October 1911 was known as The Hinckley Pavilion of Varieties and Drama, with its address still Hinckley Drill Hall.

In August 1912 it re-opened as the Pavilion Cinema and Variety Hall, continuing as such until 1913. Then, after some years of mixed functions, it was re-christened The Palladium Cinema by a new owner, Hinckley and Dursley Theatres Ltd, and it opened as “a modern cinema” in September 1920 after, according to the ‘Hinckley Times’, “extensive alterations and improvements”.

However, these works presumably still left the building with a level floor because, by 1926, it was operating as the Palladium Roller Skating Rink, for which a new maple floor had been installed.

But by 1930 it was clearly used, at least in part, for variety shows, as, again according to the ‘Hinckley Times’, the Hinckley Amateur Operatic Society was presenting shows there at that time.

The Palladium Cinema was finally closed in 1930, the owners having opened the new Regent Cinema in March 1929. They retained ownership until 1935, when Hinckley and Dursley Theatres Ltd’s interests were sold to Odeon. However, plans to demolish the building and build a new Odeon cinema on the site were abandoned when the circuit decided to convert the New Boro' cinema, which had also been acquired from Hinckley and Dursley Theatres Ltd, into the town’s Odeon.

During World War II a ‘British Restaurant’ occupied the former Palladium Cinema. From September 1954, the building was occupied by Lawrence’s Self Service Store, one of the first self-service stores on the American model to be opened in the United Kingdom (today known as supermarkets). Later, Unit Sales DIY moved in, but that closed after a fire in 1977. In November 1985, Hinckley Indoor Market was opened by ‘Coronation Street’ star Pat Phoenix in the re-constructed building. There were 15 stalls and a cafe. However, that was short-lived, and the building was demolished about 1990.

The site, at the junction of New Buildings and Wood Street, was eventually occupied by apartments, with shops below.

(Sourced from HinckleyPastPresent.org, with thanks to Darron Keeling.)