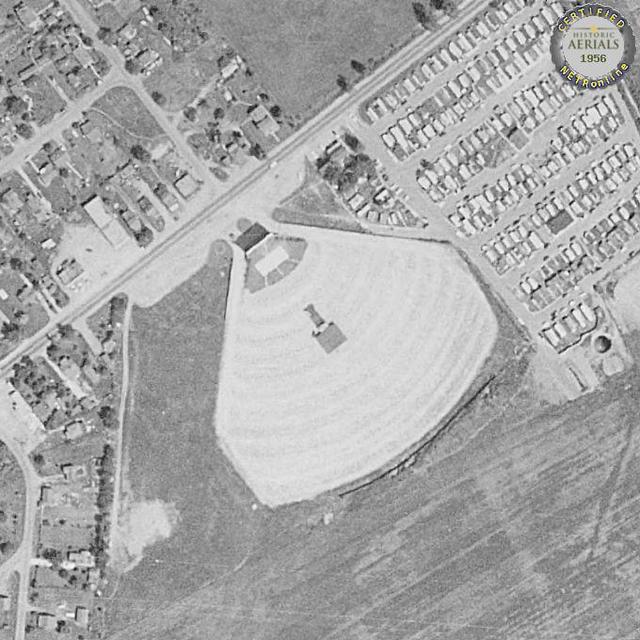 Dayton’s first large scale drive-in opened at 2700 Valley Street on Friday May 1, 1942 as the Valley Street Drive-In. Herbert Ochs, who had already opened several of the eighty-nine or so drive-in’s operating in the country at the time, was owner of the theater.

The new ‘Drive-In Theater’ was “particularly suitable for shut-ins and for defense workers", stated Herbert Ochs during an interview with a Dayton Daily reporter, “for here each automobile is your private box from which to see your favorite picture show".

Movies were changed three times a week and midnight shows were held every Friday, Saturday and Sunday for ‘victory workers’. Special emphasis was placed on showing Technicolor films on the 52’ x 60’ projection screen.

“The result of this type of operation is that we are bringing people to motion pictures who haven’t even been tapped by the indoor theater", stated Ochs in an interview with Boxoffice magazine field representative Charles Irwin. “We have checked our patrons. Not five percent on any given night are people who would have gone to an indoor house.

Our crowds are made up of couples who can’t find anyone to stay home with the babies, so they bring them in the car. We get invalids who return as many as four times a week; people who otherwise would never see a picture. Among our regulars are two fat ladies who do not go to indoor theaters because they don’t fit into regular seats. No sir, not five percent of our crowd is a potential indoor theater crowd".

In fact, in Och’s opinion, many of the patrons who visited the Valley Street Drive-In were not interested in what picture they were seeing. They merely wanted to enjoy the outdoors and some form of entertainment.

“As a test", he related, “we have sometimes ran advertisements in which we didn’t even name the picture that was playing. The number of telephone calls that come in on those occasions is no greater than when we print the title of the picture".

The drive-in’s name was later changed to Drive-In East when Ochs built a new drive-in at 6500 W. 3rd Street and called it the Drive-In West. It again changed names a few years later, eventually being called the Dayton East Drive-In.

The last owner of the Dayton East Drive-In was Levin Theaters. The theater’s last season was in 1982. The picture screen was torn down in 1990. Dayton Demolition, using cable wires and a bulldozer, pulled the screen over on its face. “It went down real easy", said one of the workers afterwards.

“The Valley Street Drive-In was Dayton’s first drive-in theater opened at 2700 Valley St on May 1, 1942. The Drive-In Theater about 700 cars could be accommodated. Lawn chairs set up near the screen could hold about 300 walk-in patrons. Early birds could dance to music on a large terrazzo floor just in front of the screen. The sound for the movies came from a large central speaker which was essentially a bullhorn. Later named Dayton East Drive-In the theater’s final season was in 1982 which the land sat vacant for just about two decades until late 90’s Holland Trucking Company purchase the land for there new location on Valley St.”