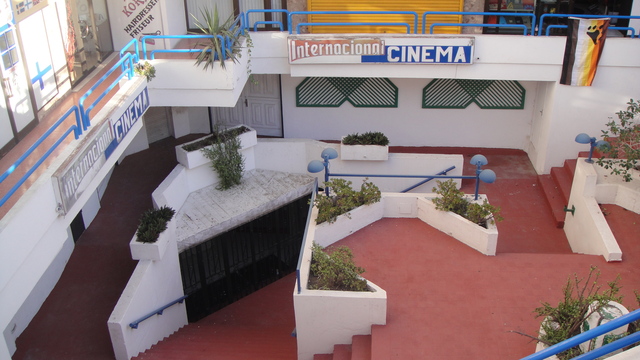 A modern cinema dating from perhaps the late-1960’s or 1970’s and situated in the sub-basement level of one the less successful centres, Centro Comercial Prisma, at the corner of Avenida de Espana and Avenida Alfereces Provisionales in Playa del Ingles, Gran Canaria (Canary Islands). The auditorium would appear to be on two levels - or alternatively on a steeply raked single tier.

From the photograph street level is on the ‘Wechsel’ balcony and this may well give a clue as the to closure of the Cine International around 1990, as access to the auditorium (the main entrance is under the green and white striped canopy) seems to be solely down the steps at the front. Modern fire regulations would undoubtedly not permit this and I was unable to find any other emergency exit doors. Whilst there are other doors from the cinema on the next level to the main entrance it still requires all access and egress to be on these front stairs. Disabled access is out of the question.

It therefore seems likely that the Cine International will never re-open despite the lack of any competition in this busy tourist town. It stands unused in 2014, never converted to more than a single screen cinema.