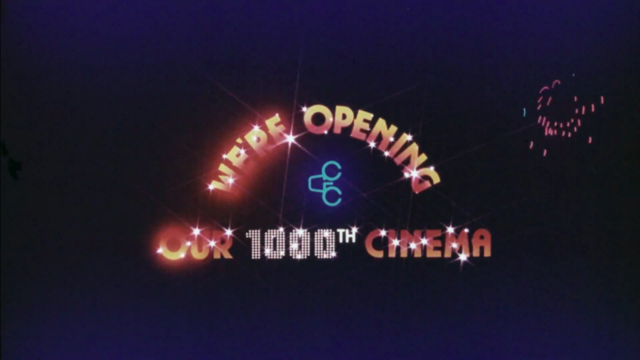 In January of 1982, General Cinemas secured a 200,000 square ft. outparcel on the Eastside of the Red Bird Mall near the Sears and Sears Auto Center anchor to build a complementary six-screen location virtually in the shadow of its existing quad cinema. The circuit would celebrate because the Redbird V-X would represent its 1,000th motion picture screen opened in June of 1982. But the celebration was short-lived as the cinema would face competition from a new-build UA theater nearby and watch crime, an economic downturn, massive population shifts in the area, and the neighboring mall’s own economic issues decimate its business plans. It would quietly bail out of both of its Red Bird locations in October of 1994 amidst protests well short of its leasing arrangements.

General Cinema’s first Redbird Mall cinema was an outparcel quad placed curiously in the Mall’s parking lot on its East side. General Cinemas had forever altered movie going in DFW by building multi-screen theaters next to or inside of shopping malls and centers and decimating the Interstate Circuit’s dominance in the area. The success of the Red Bird I-IV came as a pleasant surprise as AMC had tried two Oak Cliff theaters bailing within a combined four years on both properties.

UA began to move multiplexes near General Cinema and AMC locations to compete for major film title clearances while siphoning off business. General Cinema strategy was to overbuild its existing locations with outparcels built near its Town East V, Richardson Square, and its additional interior cinema in Irving Mall. It also added a six-screen multiplex at Redbird Mall launching on June 4, 1982 yards away from the I-II-III-IV.

Opening shows were “Rocky III,” “Chariots of Fire,” “Poltergeist,” and “On Golden Pond.” Two screens were warming up for the June 11, 1982 release of “E.T.” which GCC correctly thought would be a big hit there. Less than two years later, the UA South 8 opened just across I-20 from the GCC multiplexes on May 23, 1984 in the multiplex era across the highway from the Red Bird Mall in Oak Cliff. UA had the technological upper hand with one auditorium having 70mm projection and being THX-certified.

Massive population shifts, crime, and cinema overbuilding combined with mall saturation and economic downturn would destroy GCC’s vision of getting 20 to 30 years of leasing life out of its Oak Cliff properties. When General Cinema quickly and quietly closed both of its Oak Cliff Red Bird theaters on October 24, 1994, there was a coalition of protestors staged at General Cinemas NorthPark I & II. Protestors included the Black State Employees Association of Texas and the NAACP.

Residents felt GCC was targeting minority populations through its closures. Certainly, it could consider keeping one of the two facilities open. After all, with 40% of the population of Dallas in Oak Cliff, it did seem odd that just a single remaining multiplex and the dying three-screen Astro Drive-In could serve the area. But facts were facts and weekday screenings at the vast majority of GCC’s ten screens were simply empty as students went back to classes in 1994. Ultimately, the coalition was unsuccessful as General Cinemas demonstrated the economic problems it was having with the multiplexes. They claimed that there were around ten years of losses for both properties. The theaters were permanently shuttered and the Red Bird Mall turned Southwest Center spiraled into “greyfield status” - a term akin to a dead mall. The outlying shopping strips around the mall suffered from vacancies leading to urban blight.

Four years later almost to the day is when UA closed its South 8 also unprofitably and prior to its lease expiry at the end of October 1998. This time, there were no protests despite the loss as being far more devastating leaving no indoor movie theaters in an area with 338,000 citizens. Perhaps by the Fall of 1998 there was resignation that Oak Cliff perhaps had earned the reputation of non-support of movie exhibition. Or perhaps people understood the challenge of the multiplex in what had become a megaplex environment that destroyed General Cinema altogether and all but drove UA/Regal from the DFW marketplace. As the UA South closed that day in October, the UA Prestonwood, Northpark I&II, GCC Carrollton, GCC Prestonwood, and Collin Creek were also among those closing up shop.

When Oak Cliff’s Astro Drive-in burned down just one month later, there were no functional movie theaters in all of Oak Cliff. Though the Texas Theater did make a comeback, the GCCs sat vacant year after year. The I-IV building was razed in 2003 to wipe it from the tax roster. The V-X, however, was relaunched after 15 years of vacancy as a soccer sportsplex.

Since This General Cinema Is The Company’s 1,000th Location. This Ended Up Playing At The GCC Red Bird Mall Cinema V-X At The Time. https://www.youtube.com/watch?v=b-N64-yNYaw