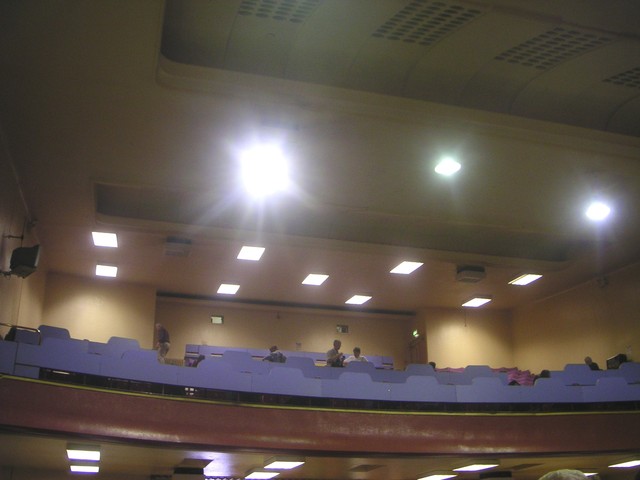 Located in Gorleston-on-Sea, near Great Yarmouth. The Palace Cinema is a small town Art Deco style cinema which opened on 16th January 1939 with Walt Disney’s “Snow White and the Seven Dwarfs”. It had 942 seats in stalls and balcony levels. It closed in 1964 and converted into a bingo club, which operated until early-2012.

The bingo operation here closed a while back, didn’t it?

The original proprietors called themselves Rickenya cinemas after their names – LF Richardson, AN KENdal and Herbert A YApp

The Compton organ in the Palace came from the Empire Cinema Aldershot and has since been removed, current whereabouts is unknown and sadly may possibly have been broken up for spares or scrapped. The organ had little ‘voice’ and although when in the Empire Aldershot the acoustic quality of the auditorium was high the sound of the organ was always somewhat disappointing and did not ‘fill the space’ with sound. This was despite the pipe chambers being high in the auditorium above the proscenium – according to Len Rawle (who used to play the Compton whilst he was stationed in Aldershot during WW2).The Compton was in poor condition when Len used to play it regularly and was rarely maintained. The organ had no illuminated surround and appeared to be a fairly basic Compton with a church style console. When installed in the Empire Aldershot it was not on a lift but at floor level below the screen. The film on the EAFA website is I think the only recording of this Compton

The organ was supplanted by a newer model from the Savoy Leicester but then the thing grew and grew and became a monster of 5 manuals and 30 odd ranks of pipes.It was assumed at the time that the first organ (Compton 2-6)was joined with the next organ (Compton 3c-6).But then the whole lot was moved to the Bygones Village at Fleggburgh.Since that closed everything has been in store.oddly the Empire Aldershot is now looking for a replacement organ.

Reopening as a screen multiplex in July 2017 53 years after its last film screened.

I’m wondering if anyone can help? I’m currently working on this project to turn this building back into a cinema. Does anyone have any photos of the original interior? When it was officially opened datewise? And what the first film shown, I’ve been asking locally and someone has come back and thinks it’s Snow White. Any help greatly appreciated

Hi all! The cinema is now open and you can find the updated program here: http://www.palacecinemagorleston.com/

It is always heart-warming when a former cinema returns to screen entertainment, and this is a splendid example. I was given a warm welcome by the very enthusiastic staff when I called in, on 10th April 2018, to see Wes Anderson’s animated fantasy “Isle of Dogs”. That was in Screen 3, one of the two smaller screens in the former balcony. They have been fitted out with ‘Luxury’ seating, as have the two larger screens in the former stalls area (which also have rows of ‘Elite’ and ‘Ultra Luxury’ seating at the rear). Capacities are: Screens 1 and 2: 125 each, Screen 3: 76 seats and Screen 4: 77 seats. Interestingly, there are plans to open a ‘Little Palace’ bingo club in space at the rear; it is unclear how much of this space, if any, was the former cinema auditorium.

The Palace was designed by architect Norman Bailey and opened on 16 January 1939 with “Snow White and the Seven Dwarfs”. After the war the Palace was bought by Raymond Stross Cinemas then sold in 1957 to Clifford Spain manager of the circuit.