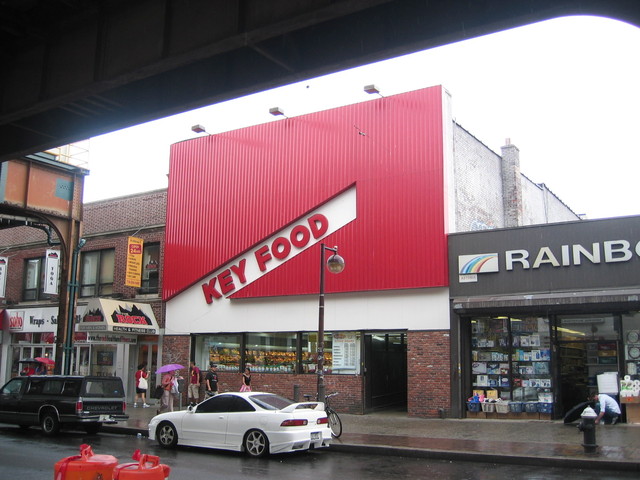 This large theatre was located on 31st Street off Ditmars Boulevard in the Astoria section of Queens. Opened in 1924, it has been closed since 1960, but the building still stands. It was gutted internally and became a Key Food supermarket on the street level and a gymnasium upstairs. The building was vacated in October 2020 and it was demolished in spring of 2021.

From the street there was no hint this was a theatre, but behind the building is a municipal parking lot and from this view you can clearly tell the building’s past life.

This street had another theatre as well. Up the block and across the street (on 31st Street) was a very small neighborhood movie house that survived into the 1970’s – ending its run playing Greek language films.

That building was a bowling alley and ice rink. Astoria Bootery was right next door along with Bobbys' Music. There was a big fire in the early 70s on the corner. A womens dept store I think that was called Susan Terry. Woolworths burned down around that time also and became Genovese. Another fond memory was going to the Midnight Rock shows at Astoria theater. I saw Pink Floyd…Live at Pompeii in 1974.

I grew up in the Grand Theater. I lived in Jackson Heights right off Ditmars on 80th street. Spent every Saturday afternoon at the Grand. Right across the street was a store called Brooks that sold appliances and had a small record department run by a man named Sal. He had two fingers missing on one of his hands. I got most of my 45 record collection there (the rest came from Times Square Records in the subway). On the corner of Ditmars and 31st was a store if I remember correctly was named Lerners…Opening onto the street they sold the greatest Sicilian pizza I ever had in my life. I went to JHS 141 and used to stop everyday after school at Melhops…I would want to go back to JHS but then I remember algebra and glad I’m not there

There is an early image of, what the marquee reads, “Astoria Grand”, a copyrighted photo on the Greater Astoria Historical Society site.

Key Food supermarket will be closed in October. Prior to the arrival of the pandemic, Target was reportedly interested in re-developing the site, but that may have changed since. News item displayed here

The building is now completely closed, all businesses have moved out. The Rock gym moved across the street into the same building where TJ Maxx is. Asbestos abatement is over and the structure is being prepped for demolition.

Unfortunately, the entire auditorium was gutted long ago when the building was converted into a store. I was able to sneak inside the building recently and there is nothing of architectural value left of the auditorium.

The building was recently demolished.

Such a Shame it had to be torn down.