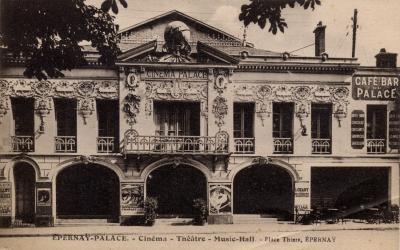 Located in the town of Epernay, south of Reims and to the east of Paris in ‘Champagne country’ home of Moet et Chandon. The Cinema Palace was opened on 31st January 1920 as a 1,500-seat cinema, theatre & music hall. It was designed in a Neo-Classical style. On 22nd October 1920 it was re-named Epernay-Palace, a music hall. It was presenting films again in September 1921. In 1947 it was remodelled in a Streamline Moderne style and was re-named Cinema Palace or sometimes known as the Palace Cinema.

In November 1999 it was converted into a 4-screen cinema and the façade was given a modern look. It was re-built in 2019 as a 7-screen multiplex and now has a Moderne style.