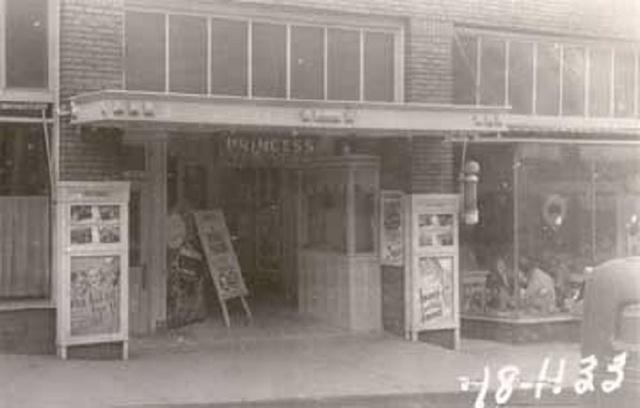 The Princess Theatre opened as early as 1917 and was owned and operated by Harold Chesler (along with 2 other people named Messers and Briske who operated for between parts of the theatre’s life). The Princess Theatre’s run on silent films ran from its opening until early 1930 in which at the time, the theatre closed for a short time for new projection and added Western Electric sound equipment. The theatre reopened on March 8, 1930 with the first talkie being “Chasing Rainbows” starring Charles King, Bessie Love, and Marie Dressler.

On September 8, 1932 around 3:00 PM Mountain Time, the Princess Theatre was partially destroyed by the newly spawned “Highland Boy” Fire. The theatre was then rebuilt and reopened days later.

On August 4, 1950, Harold Chesler announced to the Bingham Bulletin that the Princess Theatre will close to remodel. The theatre ended up closing 6 days later on August 10, 1950 for 2 weeks enable to remodel including 2 new rooms such as a new ladies room, and a private room for babies. Carpets will cover the entire lobby and aisles. The entire lobby will be soundproofed and new air conditioning unit was installed. Outer lobbies as well were renovated and a new entrance and exterior was installed.

During its last couple of years in operation, the theatre played a mix of various first-run, second-run, Spanish and horror until closing as a movie house in the middle of 1959. The Princess Theatre continued to be operated as a special events and local business house until 1961. The mining town of Bingham Canyon does not exist today.