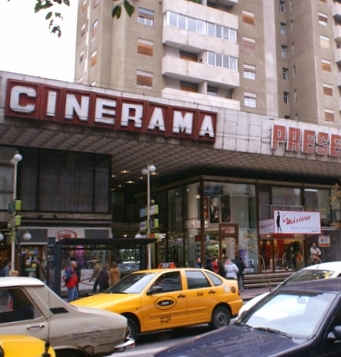 Located in the base of an apartment tower block named Edifico Centro Republica. The Cinerama Centro Republica was opened in 1965 as a 3-strip Cinerama theatre. It went over to screening 70mm films and the giant curved screen was replaced by a flat screen. In January 1984, during a screening of “Fanny and Alexander” the theatre caught fire and was badly damaged.

It was repaired and re-opened as a conventional cinema named Cine Centro Republica. It was later tripled, and then became a 6-screen cinema. In 2020 the original marquee and ‘Cinerama’ signs are still on the building and it operates as Cines Complejo Cinerama.