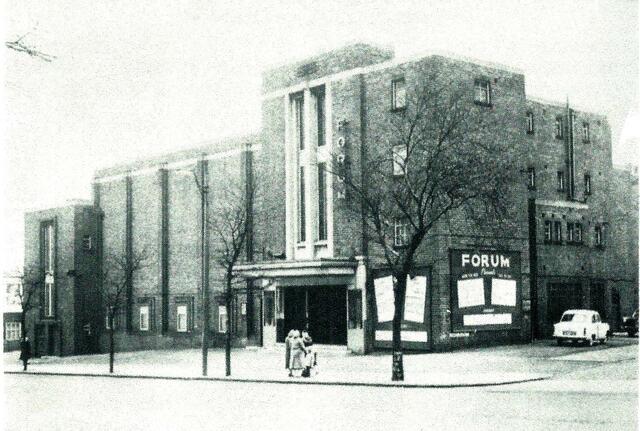 In the Chapeltown district of Leeds, the Forum Cinema opened on Monday 26th October 1936 with, on stage, BBC star Len Bermon, with his two pianists, presenting ‘Modern Rhythm’, followed on the screen by Ruby Keeler and Dick Powell in “Colleen”, supported by a Laurel & Hardy short and an “all colour cartoon”.

The proprietor of this imposing, 1,500-seat cinema (complete with a car park for 200 vehicles and a café) was Simon Newman, and the lessee was Gerald Segelman. There was a “bargain matinee” at 2.30pm and an evening show at 6.30pm.

A Lafleur/Hammond electric organ was installed when the cinema opened. This was replaced in 1946 with a Christie 2 manual/5 ranks organ removed from the Capitol Cinema, Tonbridge, Kent.

By 1953, according to the Kinematograph Year Book, the Forum Cinema had come under the proprietorship of Central Picture Theatres (Lincoln) Ltd. and the seating capacity had been substantially reduced to 1,065.

The Forum Cinema closed on Thursday 24th December 1959 with “Salome”, starring Stewart Granger. (The organ was broken up at this time.)

The building was demolished and replaced by Forum Garage. However, that, too, has been demolished. By the mid-2000’s the site was empty, awaiting redevelopment.