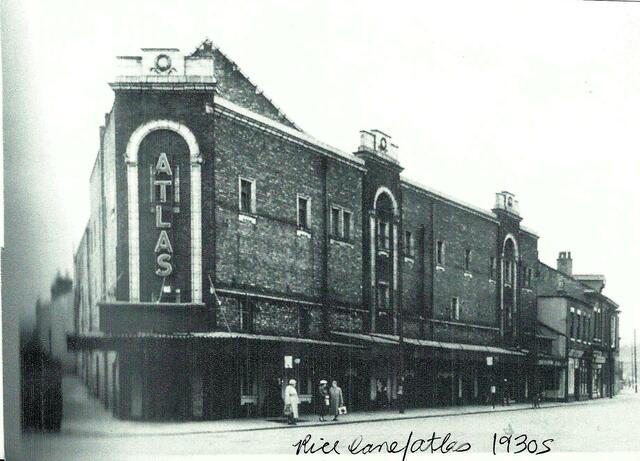 In the Walton district of Liverpool, the Rice Lane Picture House opened on Monday 18th May 1914 with a full programme that included the “sensational” drama “Detective Finn”, starring Arthur Finn. Music was provided by the Picture House Trio, under the direction of Edward C. Price, and there was seating for 1,000 patrons.

The first sound presentation was “Hearts in Exile”, starring Dolores Costello, on 20th October 1930. The cinema was then closed in the summer of 1932 for a major refurbishment, including redecorating the auditorium in an Egyptian style and reducing the seating to 800.

As the Atlas Super Talkie Theatre, the cinema reopened having been equipped with a Western Electric(WE) sound system on Monday 5th September 1932 with “The Beggar Student”, starring Shirley Dale and Lance Fairfax.

In March 1938 the cinema was acquired by Southan Morris Associated Cinemas, who ran it until October 1954, when that circuit was taken over by the Newcastle based Essoldo circuit. It was equipped with CinemaScope with the screen placed within the 30ft wide proscenium.

With small audiences at evening performances only, the Atlas Super Theatre survived until 1st March 1958, when the final programme was “Man Without A Star”, starring Kirk Douglas, and Donald O'Connor in “Francis Joins the WACS”.

The building lay derelict until November 1981, when it was finally demolished. The vacant site was eventually redeveloped with flats.