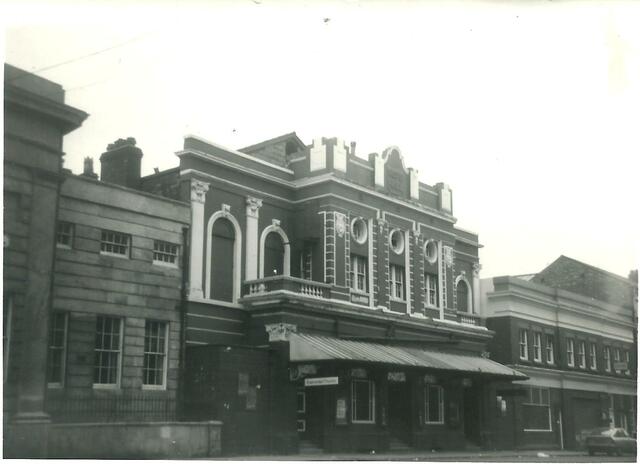 Situated in Liverpool city centre, on the site of the present Everyman Theatre, this building was originally Hope Street Chapel, erected in 1837.

In 1853 it was converted into a public leisure and concert hall, run by R. A. McFee. There were said to be 1,500 seats. According to press reports, film shows appear to have been presented in 1912 up until early-1915, presumably as one-off attractions.

Later in 1915 the hall was taken over by Edwin Haigh and, despite objections from the trustees of the Masonic Hall and Notre Dame College, who felt that a cinema was out of place in the neighbourhood, a cinematograph licence was granted.

The Hope Hall Cinema opened on Saturday 19th August 1915. The auditorium had been renovated, and seating reduced to 960. The tall proscenium arch was 20ft wide, the stage was 11ft deep and there were two dressing rooms, used for occasional variety acts during the 1930’s.

A BTP sound system was installed and the talkies arrived on Monday 17th June 1929 with “The Moulin Rouge”, starring Olga Tschechowa, and “At the Dentist’s”, a short, starring George LeMaire, that showcased a series of variety acts.

It was taken over temporarily by the J. Leslie Blond circuit, showing ‘continental’ ‘X’ certificate films, but was more formally re-opened on 8th May 1961 with Ingmar Bergman’s “So Close to Life” and “The Little Island”, an animated short written and directed by Richard Williams.

From 10th December 1961 this new venture was re-named the Everyman Cinema, but audiences fell away as people left the area to make way for new University buildings. The Everyman closed on 12th January 1963 with “Sons and Lovers”, starring Dean Stockwell and Wendy Hiller.

For a short while the building was used as a dance hall but, in August 1964, conversion to a live theatre began. The Everyman Theatre opened on 28th September that year.

This closed in January 1977 and was almost entirely demolished to make way for the current Everyman Theatre, which opened on 21st September 1977.