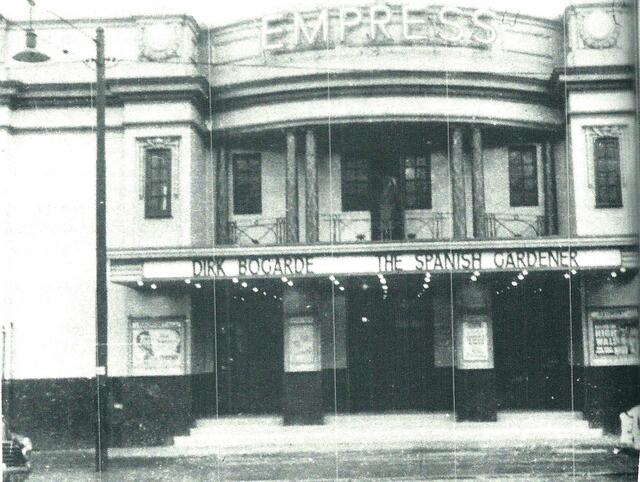 In the Tuebrook district of Liverpool, the 980-seat Empress Picture House opened on Saturday 20th February 1915 with a silent version of “Kismet”.

It was part of the circuit operated by T. Halliwell Hughes. That was acquired by Denman Picture Houses Ltd. in March 1928 and the Empress Picture House became a Gaumont-British cinema.

Despite limited space, CinemaScope was installed, the first presentation being “Sign of the Pagan”, starring Jeff Chandler and Anthony Quinn. But audiences declined, and, from 21st December 1959, performances were reduced to once-nightly. Not surprisingly, the Empress Picture House closed on 12th March 1960 with “House of the Seven Hawks”, starring Robert Taylor, and “Tarzan, the Ape Man”, with Denny Miller.

The frontage was covered with metal cladding for a supermarket that opened in 1966, but the building was demolished the following year during the construction of a major dual carriageway road on West Derby Road.