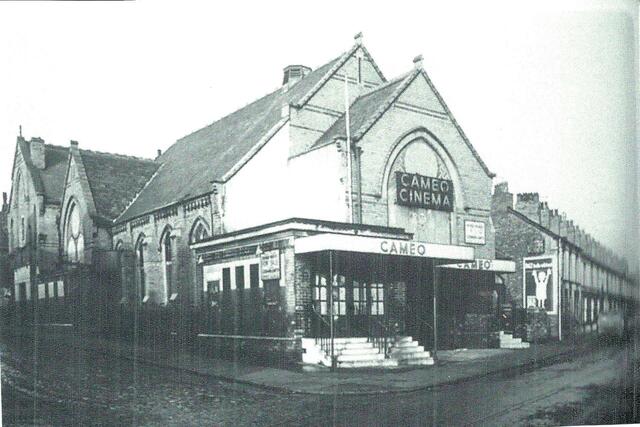 In the Sefton Park district south of Wavertree, the New Cameo Picture House opened on or after 4th March 1926, when its first Cinematograph Licence had been granted to Bedford Cinemas Ltd. It was an adaptation of a chapel, with a new frontage barely concealing the original building.

In March 1928 the cinema was acquired by General Theatre Corporation(GTC), in the amalgamation of circuits under the control of Gaumont-British. The cinema was closed in 1929, for reasons not known, but which presumably included much modernisation, and a Grand Re-Opening, as the Cameo Cinema, took place on 25th October 1937 with “Elephant Boy”, starring Sabu.

The cinema led a fairly uneventful life until Saturday 19th March 1949, when it made front page news when manager Leonard Thomas and cashier John Catterall were murdered by a gunman who burst into the office and stole the paltry sum of about £50. The gunman escaped, and later on two petty criminals, George Kelly and Charles Connolly, were charged with the murders. Kelly was said to have been the gunman, while Connolly waited outside. At their trial, Connolly pleaded guilty and was jailed for 10 years (he died in prison). Kelly pleaded not guilty, but was convicted and hanged. However, his relatives always contested his conviction and, in 2003, the Appeal court quashed both convictions. The murderer has never been caught.

Back at the Cameo Cinema, in the mid-1950’s, despite the rather narrow, 21ft, proscenium, CinemaScope was installed. The first presentation was “Lucky Me”, starring Doris Day. But the cinema’s days were numbered, and it closed on 5th January 1957 with “Calcutta”, starring Alan Ladd, and Frankie Howerd in “The Runaway Bus”.

The building became a warehouse, then stood derelict for many years, its doors and windows bricked up, before being demolished for the site to be used for housing.