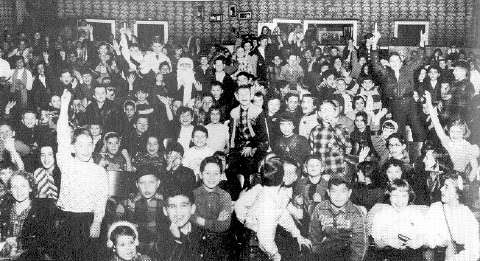 This was a plain theatre on the second floor of a multi-shop building called Ferri’s Block. It showed double bills six days a week from before the World War II era up through the 1960’s.

A Providence Journal newspaper article on August 13, 1956 carried the banner “Thornton Girl to Star in Movie.” The girl was 13-year-old Frances Manfredi who had a role in the film Rock, Rock, Rock under the name of Fran Manfred. The film starred Tuesday Weld and Alan Freed. Ms. Manfredi surely saw movies many times at this theatre in the village of Thornton. I don’t know what became of her, and her name does not appear on IMDb, apart from the credits of this one movie.

“Mario Votolato, manager of the Johnston Theatre, narrowly escaped death from suffocation recently when smoke and flames ravaged the building housing the popular neighborhood theatre. Fire caused by flaming wax in an adjoining bowling alley filled the entire Thornton district with dense smoke. Votolato entered the theatre, which was not in operation at the time, to take out films and rescue two kittens. After he entered the darkened auditorium he was unable to see, even with a flashlight. Choking with the smoke and growing weak, he dropped the flashlight. A volunteer fireman, who had entered the theatre, saw the light drop and heard the choking and thought Votolato had fallen through the floor. He inched cautiously over until he reached the body of the theatre manager and dragged him to a window for air. The manager save one of the kittens and all of the films. Votolato estimated damage to the building at approximately $20,000.”

Item in Boxoffice magazine, November 6, 1954:
“The Johnston in nearby Thornton is giving away hand-painted ovenware to hype business.”

Item in Boxoffice magazine, December 30, 1950:
“Mario Votolato and his wife, who recently leased the Johnston Theatre in Thornton, R.I., from Sam Richmond, were in [boston] booking at Monogram.”

[Note: Ferri’s Casino was located in Ferri’s Block. It became the Johnston Theatre in 1941. Before that it was referred to as Ferri’s Theatre or the Casino. Thornton is a village in Johnston at the Cranston border.]

More of same (see above entry.)

“Henry Tobin, resident manager of the Olympia, Olneyville, has leased the Casino in Johnston from Nicolina Ferri, rechristened it the New Johnston and is operating it five nights a week."
—-from Boxoffice magazine, September 20, 1941.

Item in Boxoffice magazine, May 5, 1962:
“Rhode Islanders of Italian descent were particularly interested in recent programs at the Johnston Theatre, Thornton, where "The Ten Commandments” was presented with all-Italian dialog, and at the Leroy in Pawtucket, where “Buongiorno Primo Amore” and “Guai ai Vinti” were shown for a single night.

This theatre was an outgrowth of Ferri’s Casino Theatre, around the corner on Plainfield Street. That was a tavern with a fully functional movie theatre. That theatre existed from around 1929 to 1941. The Ferri family built Ferri’s Block which would house the Johnston Theatre on its second floor, and the theatre part of Ferri’s Casino would then be closed in 1941.