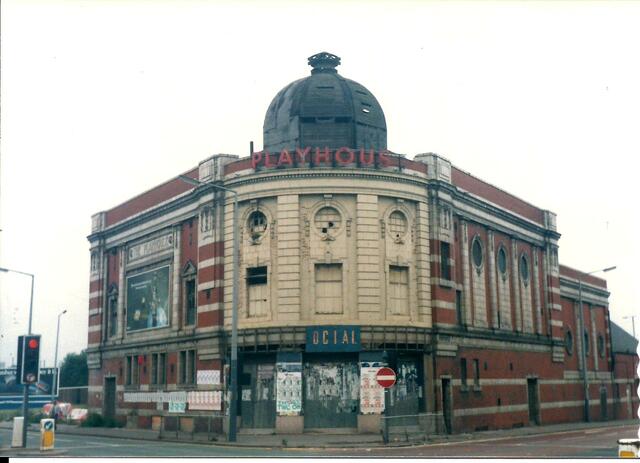 Situated on Oldham Road, at its intersection with Queens Road and Hulme Hall Lane, in the Manchester district of Miles Platting, the Playhouse opened in July 1919.

It is unclear whether it opened as a live theatre, but it certainly appears to have spent most of its life as a cinema. On 1st July 1929 it was acquired by Associated British Cinema(ABC) chain, and seems to have led a rather uneventful life before being sold on to the Leeds based Star Cinemas chain on 1st April 1969. However, that company closed the Playhouse on 6th June 1970 with Vincent Price in “Scream and Scream Again” & Tom Stern in “Hell’s Angels ‘69”, and bingo took over.

On 23rd October 1978, Manchester City Council approved an application for the former cinema to be used as an “Aquarium and Aviary”. However, it is assumed this did not proceed and that bingo continued.

On 31st March 1981, no fewer that five applications were submitted for change of use that same day, to: retail shop, [unspecified] leisure facilities, light industrial unit, warehouse and showrooms with ancillary retail space! All were either refused or not proceeded with, and it is thought bingo carried on until the building was finally boarded up in 1986/7. It was demolished around 1998.