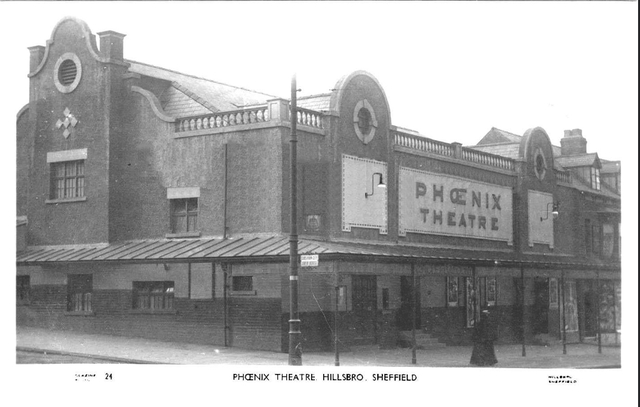 In the Hillsborough district of Sheffield, the Phoenix Theatre was formally opened on Saturday 25th March 1911 by Councillor A. T. Bescopy before an invited audience: the first public performance was on Monday 27th March.

The proprietor was Frederick Phoenix. The main entrance on Langsett Road gave access to the stalls, circle and balcony (with the ‘circle’ being the front seats of the balcony), while the pit entrance was a little way up Hatton Road, which ran down the side of the building. The building was of red brick with stucco at the upper levels: “Phoenix Theatre” was prominently displayed along the frontage. The stage was 12ft deep, the proscenium 40ft wide and there were three dressing rooms. There was seating for 640 patrons.

It appears that cine-variety continued until June 1925. The hall then ceased to be a cinema, and presented revues performed by touring companies and seasons of plays by repertory companies.

However, in 1933 the hall re-opened as a cinema, having been equipped with a Western Electric(WE) sound system, and live performances appear to have ceased.

The cinema never opened on Sundays. Matinees were discontinued from March 1958 and the Phoenix Theatre closed on 10th September 1960, the final feature being “The Trials of Oscar Wilde”, starring Peter Finch. By this time, the seating capacity had reduced to 598.

The building was demolished and became the site of a petrol station. By August 2020 that had closed and the site was vacant. (It is opposite Hillsborough barracks.)