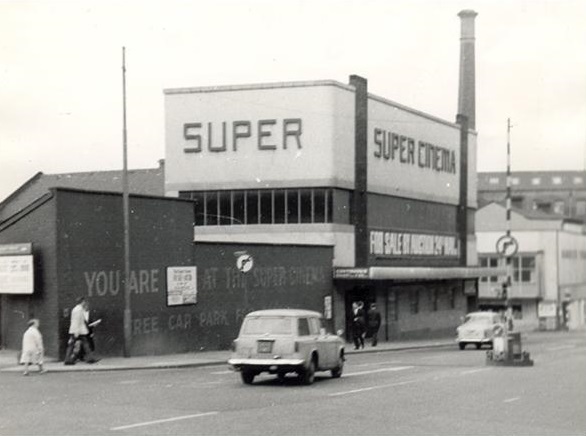 Located in Stockport, Cheshire. The Stockport Electric Theatre was opened on 12th October 1910 with “The Mohawk’s Way”. It was the towns' first purpose built cinema and it was designed by architect G.S. Valentine of London, his 84th cinema design. All 673-seats were on a single floor. In April 1911 plans were put forward to build a balcony seating area, but these were refused. In September 1911 it was re-named Cinema Theatre. It was redecorated and alterations were made to the plans of architect William Swann, reopening on 29th August 1921 as the Super Cinema. On 17th March 1930 it screened its first ‘talkie’ Maurice Chevalier in “Innocents in Paris”.

It was closed on 3rd April 1937 for a complete modernisation to the plans of architect George Clayton. A small 350-seat balcony was added, which increased the seating capacity to 1,023. A Western Electric (WE) sound system was installed and it re-opened on 4th October 1937 with Shirley Temple in “Stowaway” & Clapham & Dwyer in “Variety Hour”. A fire in the stage area on 20th March 1939 fid considerable damage, and following repairs it reopened on 4th July 1938, with a café that had been built under the balcony seating area.

From the 1950’s the Super Cinema began screening reissues and B films. The Super Cinema was closed on 27th November 1965 with The Beatles in “Help” & “The Cool Mikado”. It was offered ‘For Sale’ at auction in 1966, but failed to meet the reserve price of £45,000. The building stood empty and it was purchased by the Crown Agents in March 1967 to be the site of the towns' new post office. The Super Cinema was demolished soon after.