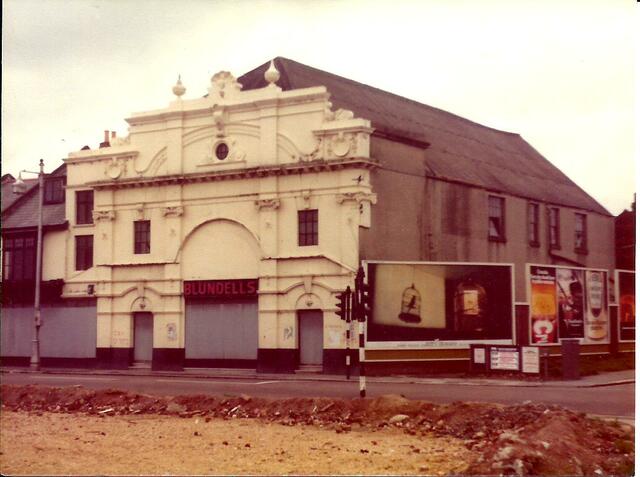 Situated in the Landport district of Portsmouth, this site took its place in the list of places of entertainment in the early-1880’s as a temperance music hall. This had been built by Frank and Bob Pearce, with Frank’s wife, Harriet, in charge of bookings.

However, the building was clearly not the most robust, as it was blown down in a gale in 1884. After being rebuilt, it opened as the People’s Palace of Varieties.

At some stage, ventriloquist Harry Vento rented the hall for £9 a week and it became known, most likely only informally, as Vento’s Music Hall.

Unfortunately, the relationship between Harry Vento and Frank Pearce deteriorated, mainly due to the state of the building. Following a court case in 1891 over rent arrears, which was won by the landlord, Mr Vento moved out.

The People’s Palace gradually acquired a good reputation as a music hall, with many well-known stars appearing, such as Vesta Tilley and, particularly, Hetty King, a great favourite, in this home to the Royal Navy, with her hit song “All the Nice Girls Love a Sailor”.

Inevitably, moving pictures appeared, with one of their earliest incarnations being Le Clairs Animated Pictures, which formed part of a variety bill in 1904.

Film shows appear to have arrived full-time from 19th January 1910, when the licence was transferred to W. Jury and the People’s Palace was renamed Jury’s Picture House. In January 1914, seating was licensed as Pit: 280 and Balcony: 220. The Gallery was closed off until work could be undertaken to satisfy safety requirements. This was completed by March and the picture house gained another 100 seats.

However, Mr Jury appears to have left later in 1914 as, on 8th December, the licence was transferred to Frank Pearse.

In January 1917, possibly following Frank Pearce’s retirement, the licence was transferred to Mr H. Saunders. He re-opened it as the Palladium Cinema, with seating for 714 (stalls 495 and balcony 219).

In December 1922 the licence was transferred to Mr West then, in October 1923, to Cosham Picture House Ltd.

On 31st March 1930 the first (unspecified) ‘talkie’ was shown, but the Palladium Cinema closed on 15th November 1930 with the drama “Atlantic”, about the ill-fated RMS Titanic, starring Franklin Dyall and Madeleine Carroll.

In 1933 and 1937 proposals were put forward to re-open the cinema, but the necessary remedial work appears to have been too costly.

The building lay derelict until the late-1940’s, when it was converted into a warehouse for drapers John Blundell Ltd.

In August 1974, when the building was once again empty, there were suggestions that it might be converted into an all-purpose activities centre for the newly-formed Landport Play Association. However, this came to nothing and, eventually, the building was demolished as part of the Lake Road redevelopment scheme.