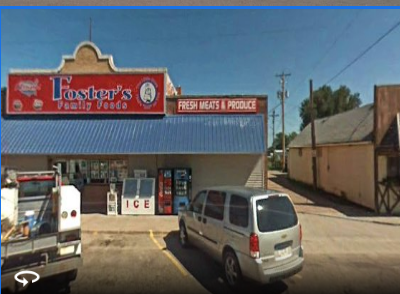 Julia Ross opened her new Elm Theatre in downtown Elm Creek on April 30, 1927 with Ronald Colman in “The Winning of Barbara Worth.” The new-build, 300-seat Elm Theatre sported Power projectors, Da-Lite screen, and Arctic Nu-Air ventilation. It operated on a 30-year lease. Three operators later, the theatre appears to have stayed silent into 1931 before moving to sound briefly and going out of business.

Peter Fakas came back to the location and reopened it as the Elm Theatre on July 22, 1938 with “Love on a Budget” starring the Jones Family supported by Monte Collins in “Calling All Curtains” and a cartoon.

The final operators, Mr. and Mrs. W.C. May, refreshed the theatre 1946. It was operated as the New Elm Theatre much of the next seven years. In January of 1954, the couple installed an 18-foot wide curved screen to show widescreen, CinemaScope films and reduced seat count to 212. The Mays closed the theatre at end of lease with a free Christmas show on December 21, 1957. The equipment was sold and the floor leveled to make way for the Thrifty Grocery Store.

Uploaded a photo of Foster’s Family Foods which is on Tyler. Looking at the roof line I believe this was the site of the Elm. If so the address of the theatre would be 130 North Tyler.

Here’s evidence that the Elm once had a rival theater, noted in the February 25, 1928 issue of Movie Age: “Karl Green has opened a new theatre at Elm Creek, Nebr., and christened it the Oak.” I wonder if a third house would have been called the Ash?