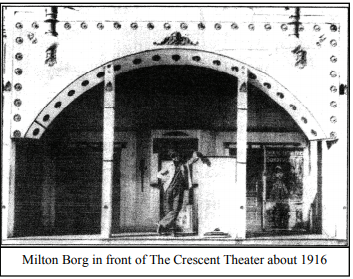 The New Crescent Theatre launched with Nat Goodwin in “Business is Business” on September 20, 1915. Its gala opening was a live production of “The Prince of Tonight” on October 7, 1915. The Crescent’s movies, however, proved popular moving to full-time motion pictures. Under new operator, M.H. Garvin, the Crescent Theatre went through a major refresh, closing temporarily on December 6, 1924 with “The Bedroom Window”.

Unfortunately, fire destroyed the Crescent Theatre. Bookings were relocated to the city’s Auditorium. Garvin was in the construction phase of the new New Crescent Theatre when he dropped out of the rebuilding of the project. Hostetler Amusement Circuit took on the New Crescent Theatre, relaunching it in the same location as the Sun Theatre. The new-build Sun Theatre launched on October 19, 1925 with Reginald Denny in “California Straight Ahead". It stood the test of time, still operating in the 2020’s.

Uploaded a photo from Movie Theaters of Holdrege which I found at www.usgenwebsites.org>NEPhelps>MovieTheaters.

The information that I came upon in the Movie Theaters of Holdrege indicated that the theater opened by Mr. Hilsabeck in July 1908 was called the Sterling and was located at 315 East Avenue. I found no indication that the name was changed to Crescent. I am establishing the Sterling on CT.

Re the Milton Borg in the photo I uploaded: according to one source, he was the manager between 1913 and 1917