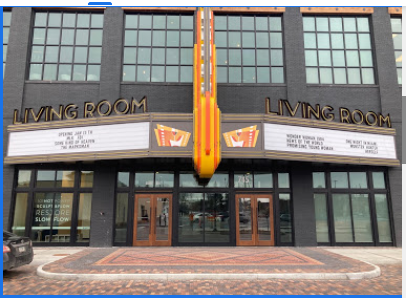 Designed by Ratio Architects, the largest of its eight auditoriums has 99 recliners with three at 75 and four with 42. Architect Jeff Milliken notes “the theater’s design takes a modern approach to incorporating Art Deco styles by including a few classic Art Deco elements like decorative metals and accent lighting.”

Provided is an on-site restaurant with recliner-side tables for in-theater dining. A sampling of the menu shows Big Fat Greek Salad, Fall Of The Romaine Empire, Inglorius Bratwurst, and El Duderino. Pizzas include Animal House, Fast Times, and Home Alone.