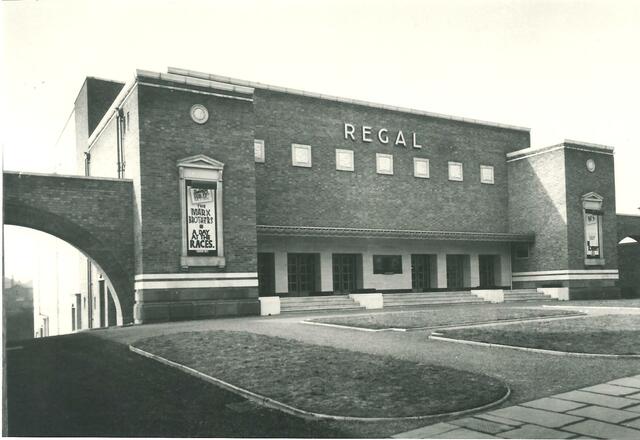 Located in Bebington, to the south of Birkenhead, Merseyside. The Regal Cinema was opened on 12th February 1938 with Ronald Young in “Topper”. It was built for and operated by the Southan Morris chain of S.M. Super Cinemas. Designed in an Art Deco style by architect Sidney Colwyn Foulkes, seating was provided for 837 in the stalls and 479 in the circle. The auditorium was illuminated by a Holophane lighting system which gave an ever-changing colour scheme. Signs of the Zodiac were on display in panels above the proscenium. On 5th October 1938 a Compton Theatrone organ was installed and played by organist Harry Croudson.

In later years the four columns on each side of the proscenium opening were removed to accommodate CinemaScope. On 25th August 1954 it was taken over by the Newcastle based Essoldo chain and in January 1957 it was re-named Essoldo. In the winter of 1968/1969 the heating system failed and it was closed on 22nd February 1969 with Peter Cushing in “Corruption” & Alex Cord “Dead or Alive”. It stood derelict for a while and was demolished to build a supermarket on the site. Today a Tesco Express.