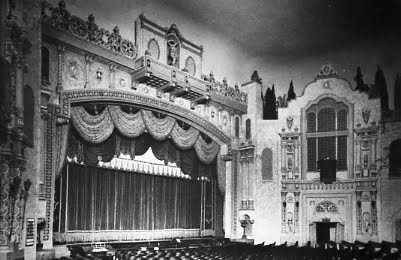 Built on the site of the Palace Theatre, the Venetian Theatre was similar to the Venetian Theatre in Milwaukee, and also built by Universal Pictures' short-lived theatre circuit. Racine’s Venetian Theatre was a larger and more sumptuous Atmospheric style, designed by United Studios of Chicago in an Italian Renaissance style that seemed to have some Ancient Roman thrown in. The rear section of seats in the large balcony was covered by a portico supported by columns. A long entrance lobby was two stories high, with a beamed ceiling.

The Venetian Theatre opened on April 12, 1928 with Laura LaPlante in “Thanks for the Buggy Ride” on the screen and vaudeville on the stage.

Over the years, the Venetian Theatre passed through several ownerships, but was always one of Racine’s top theatres. But by 1971, the city’s downtown area had declined to such an extent that the Venetian Theatre was forced to close. It stood empty until demolished in 1977.

(Racine Journal Times editorial, January 7, 1956)
TWO YOUTHS who severely injured a theater manager in an unprovoked assault after creating a disturbance New Year’s Eve have already
learned that such “sport” is expensive.
Richard Rothering, 20, of 2016 Washington Avenue, was fined $50 for disorderly conduct and $25 for assault and battery, plus costs, in
Municipal Court Tuesday. His companion, Donald Rasch, 20, of 1404 Eleventh Street, was fined $25 and costs for disorderly conduct. But now there’s a possibility that the price of Rothering’s “fun” may go considerably higher. A civil suit for $7,500 damages has been filed in Circuit Court by Stan Gere, manager of the Venetian, for medical expense, doctor bills, pain and suffering due to injuries to the head, mouth, teeth, hands and body.
The two youths admitted the assault when they appeared in Municipal Court. They had been ejected from the theater once that night for causing a disturbance. They came back. When a policeman went after them again, they fled to the balcony. And it was while running from the policeman that they attacked Gere. Rasch bumped into him and swung him around. Then Rothering came along and smashed him in the jaw. As pointed out here the other day, this was a particularly vicious and unnecessary attack because Gere is a quiet, reasonable sort of a guy who would go out of his way to avoid trouble with anyone. But maybe this case will help to clear up the “hoodlumism” that has been causing a lot of difficulty in theaters here. Though the incident related here occurred on New Year’s Eve, many somewhat similar episodes have taken place frequently. A small gang of young wise guys go to theaters. Sometimes some of them are partly drunk. At other times, all are sober. But always, they spoil the evening for people trying to enjoy the movie, by loud talking, sometimes
off-color language, putting their feet on seats in front of them, etc. And when theater attendants warn them, the smart alecks become defiant.
On occasion, they sneer at police trying to help keep order, and “dare” officers to do something about it.
It should be emphasized that such trouble-makers are an extremely small minority. Most young fellas and girls who attend theaters are decent and orderly. But, the few have been spoiling it for the many, and it’s time that they suffered a real “crack-down.” Maybe the current case will be helpful in that direction.

Thanks for sending. And that was 1956! Can you imagine if the Venetian were still operating today what kind of a crowd would attend. A “Home” to the homeless and many unmentionables that roam Racine streets. It would
have to be ushered by military police from Great Lakes. and you know what that would cost!!

There are several photos of the Venetian Theatre at this post from the weblog of the Racine Post.

Thanks Joe for the post…… It must have been great!!

I grew up in Racine and remember my father taking me to see My Fair Lady in 64 and my mom taking me to see the Sound of Music. There were two theaters on the same block – this one and the Rialto. I was just in Racine and saw that an antique store was selling a very large gargoyle from the Venetian. It was so cool and I was looking for photos from the theater to see if I could find where is was. It would be great if it was donated to the public library.

Big Grand opening section started with this page below:

I remember when they did this. I made phone calls to the mayor and others stating that demolition of the theater was a mistake. It clearly demonstrates that Racine’s government had no foresight at the time.

The destruction of this theater, and so many others, was a tragic loss for Racine, which was a handsome city at one time, now greatly diminished. It’s unfortunate that Racine’s later leaders failed so miserably to live up to their predecessors and build on the splendid legacy left to them, rather than shamelessly squandering it.