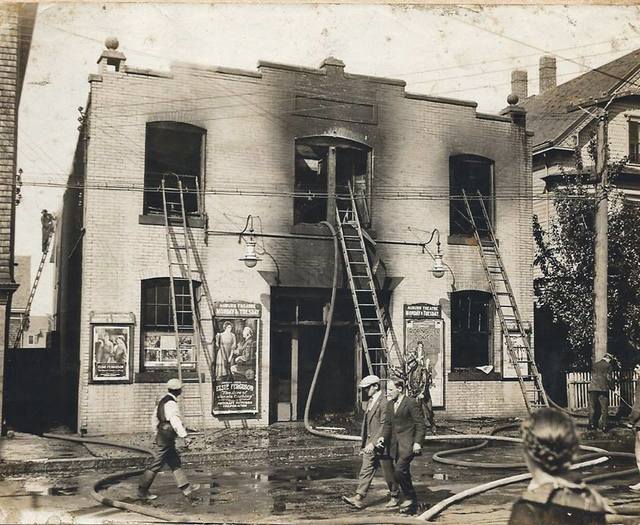 The Auburn Theatre was built around 1914 and lasted only until 1918 when a fire, begun by the burning of nitrate film stock, destroyed the interior. The building, located on Park Avenue near the corner of Elmwood Avenue, still remains and is used for a commercial business.

One can still see the niches on the front of the building that were used to display posters of featured attractions at the theatre. A 1915 Providence Journal ad lists the theatre as “Exhibitors of Paramount and Mutual photo plays”.

I will report some of the other contents of the 1915 ad I have here. For the week of April 19th, 1915, the theatre showed: Monday & Tuesday: THE MAN FROM HOME and JUSTIFIED; Wednesday and Thursday: THE STRAIGHT ROAD with Gladys Hanson and THE CHINATOWN MYSTERY; Friday and Saturday: THE BOUNDARY LINE and the Thomas Ince produced IN THE TENNESSEE HILLS. Admission was 10 cents for all shows.
(Sunday shows were prohibited in Rhode Island at that time.)

Here is a photo of the former theatre as it appears today.
View link

Historic photo of the Auburn Theatre after its 1918 fire.
View link

Gladys W. Brayton wrote of the Auburn Theatre origins, on the website of the Cranston Historical Society:

…Town Councilman Alfred Barolet built the Auburn Theater on Park Avenue near the corner of Elmwood Avenue. In February of 1913 he was showing “Motion Pictures and Illustrated Songs.” Admission was five cents, reserved seats ten cents. Pictures changed three times a week and the current program consisted of “The Ranks,” “The Burning Brand,” and the “The Vengeance of Fate.”

The same year the Edgewood Theater was advertised to open at Firemen’s Hall, but due to a misunderstanding of insurance laws this project fell through.

Mr. Barolet, being a public spirited man, allowed use of his theater on off nights for benefits of various kinds, including such affairs for the Fire Companies of the city. It was advertised as “The Small Theater with the Big Features,” In 1915 it was showing “The Political Feud” (two reels), “Giddy, Gay and Ticklish” (a Keystone production), “Two Kisses,” “The Old Maid” and “Mabel’s Flirtation.” On Saturdays it featured “Tess of the Storm Country” with Mary Pickford as the star.

“Peter R. Nelson, one of the best-known and well-loved showmen in the state, recently died at the age of 76. Nelson was at various times owner of the old Auburn Theatre and the Park in Cranston. At one time he also was associated in the operation of the old Bijou in Providence and the Royal in Olneyville. Entering the theatre business in 1920, he operated the Auburn for three years before selling his interests to the Park Theatre Corp., of which he remained a partner until 1936 During the period from 1933 to 1936 he operated the Park. For more than 30 years he also operated a store in the Park Theatre building, retiring in 1951 because of his health.”

[Question: was the Auburn restored after the 1918 fire, to function for a few more years?]

This theatre was part of the September 1923 6th Paramount Week. In this advertisement from the (Providence) Evening Tribune, September 1, 1923, we see a fascinating list of Rhode Island area theatres, many long-gone and long-forgoten, or even unheard of, as well as what they were showing during that week. Pola Negri in Bella Donna was one of the offerings here. CLICK HERE and move text to see all theatres.

Interesting piece reporting on Christmas parties at this theatre and two others in 1922:
CHRISTMAS PARTIES