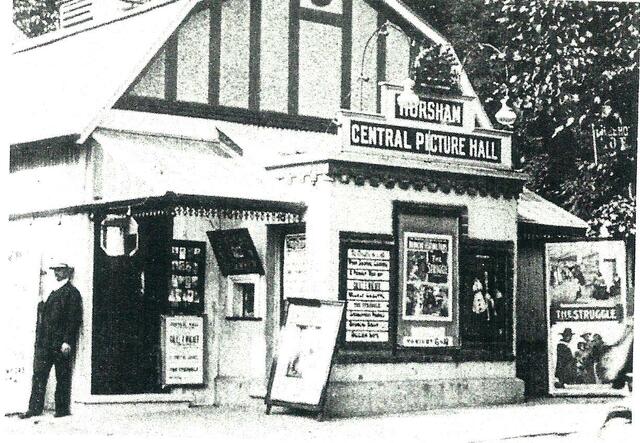 In the centre of Horsham, West Sussex, the Central Picture Hall opened on 13th October 1910. The building had a steel framework clad in corrugated iron, while the walls were partly covered in fire-proof green asbestos. The screen was 12ft wide by 9ft tall. The building stood on North Street, at the junction with Linden Road. The cinema seated 250 on wooden benches.

The Central Picture Hall closed on 9th August 1919 for extensive alterations, re-opening on 23rd October with a small balcony and, now, seating for 600.

A British Acoustic(BA) sound system was installed in September 1930, at around the time when the cinema seems to have become known as the Winter Garden Cinema.

It was acquired by Union Cinemas in October 1935. Licensing issues, mainly regarding the lack of secondary lighting, caused the cinema’s licence to be suspended. Clearly deciding the remedial work was not worth the expense, Union Cinemas closed the Winter Garden on Thursday 6th May 1937.

The disused building was finally demolished in the late-1960’s, since when the site appears to have been lost in further major area redevelopment.