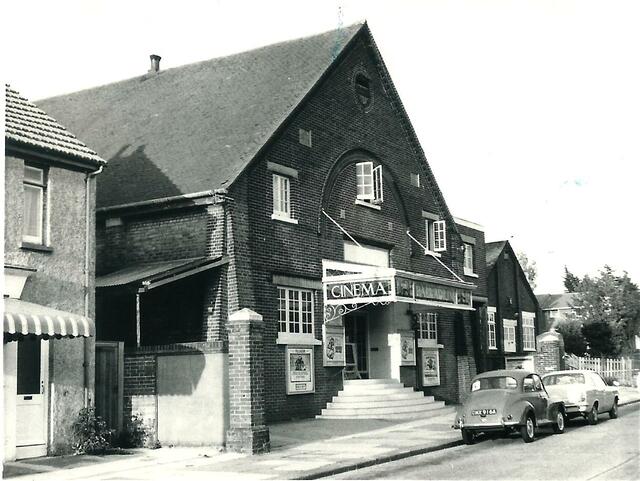 In Littlehampton, West Sussex, the Olympic Hall Skating Rink opened on 16th March 1910. However, as in many other towns, skating went out of fashion fairly quickly, and the building soon went over to theatrical performances. Film shows followed and, by 1913, the building had been renamed the Empire Theatre and Cinema.

Sometime in the 1920’s the Empire Theatre and Cinema was renamed the Palladium Cinema. Stage shows were still presented occasionally, mainly by the Littlehampton Amateur Dramatic Society. According to the 1931 Kinematograph Year Book (KYB), the stage was 20ft deep and there were three dressing rooms (“downstairs and very pokey”, according to one account!). An Edibell sound system had been installed, and the proprietors were H. Filer and S. Shinebaum.

By the 1953 KYB the cinema was owned by South Downs Cinemas Ltd., of Southsea. There were then 890 seats; this had reduced to 650 by 1980, according to the Cinema Theatre Association’s Directory of Cinemas, presumably a combination of the installation of CinemaScope and some other unrelated seating adjustments. By that time, the Palladium Cinema had been taken over by Myles Byrne (Hereford) Ltd. chain.

(The adjustments required for the installation of Scope put paid to most of the stage shows, with the amateur dramatic society moving to Wick Hall, until the Windmill Theatre (see separate Cinema Treasures entry) was renovated in the 1970’s. However, limited scale live shows continued, especially the popular Littlehampton Charm Competition, which attracted over 100 entries in its first year, in 1957. Celebrity judges included actor Roger Moore. It is not known how long this event ran for.

The Palladium Cinema lasted until Friday 26th September 1986, when it closed with Steven Spielberg’s “E.T.”. The seating capacity at closure was reported as being ‘only’ 430, so perhaps only the stalls was being used by then.

The closure was announced as only temporarily, as the building was to re-open as a leisure centre, with a cinema in the former circle and bingo, a nightclub and a restaurant in the former stalls. Despite public opposition - 25 letters of protest and two petitions signed by 700 people, plus opposition from the town council - these plans were approved by Arun District Council’s Planning and Development Committee.

However, building work on the project, to be called Panthers, stopped in November 1986, when the new owners suffered a series of setbacks: losing the licence for their snooker club elsewhere in the town and failing to obtain a bar licence for the proposed nightclub.

The owners reluctantly gave up, and sold the building to a developer for £250,000.

In a nice touch, the flats that were subsequently built on the site are called Amenic Court (spell it backwards!).