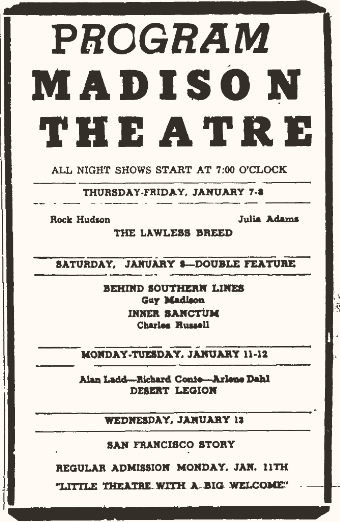 In 1976 the building was converted into offices for an insurance company.

This web page has information about a movie theater which appears to have been the only one in Madison. It was at 120 E. Washington Street, and opened in 1921 as the Strand Theatre. In 1923 it was renamed the Genesta Theatre, in 1925 it became the Madison Square Theatre, and in 1931 the Madison Theatre. In 1976 the building was converted into offices for an insurance agent.

There are three photos of the building, two from 1949 and one from ca. 1970. Sometime after 1949, and probably not long after, a wedge marquee and a vertical sign were added to the building. The later photo is not very clear, and it’s not possible to tell if the theater is open at that time or not, but it does look like there might be a movie poster on display. Around 1950 the trade journals mentioned a proposal for a new theater in Madison, but I haven’t found evidence that it was actually built. I suspect that the project proved too costly for a town of 2,500, and the old theater was renovated instead.