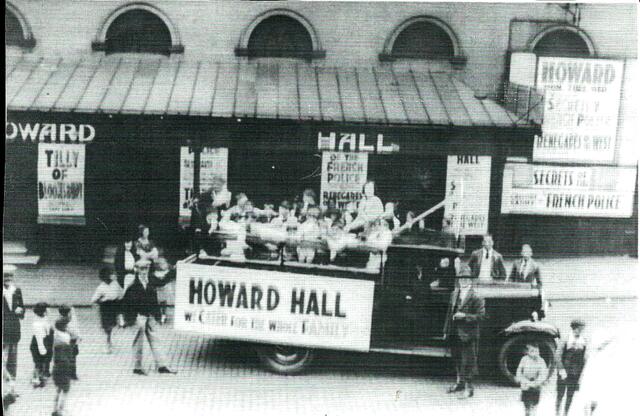 In North Shields, Tyneside, a Wesleyan Methodist Chapel opened on 10th January 1808. There was seating for 2,000 on the ground floor and in the gallery, and the building cost £2,500.

The Wesleyans departed in April 1891 and the hall was purchased by a group of parishioners. They renamed it Howard Hall, and let it out for a range of activities, including meetings and concerts - and Sunday evening lantern shows.

In early-1908 it was decided that half of the entertainment programme would consist of cinematograph exhibitions. The National Animated Picture Company and Reed’s American Bioscope appear to have alternated their shows, but a newspaper article, still early in 1908, mentions “a return visit” of Sydney Carter’s New Century Talking & Singing Animated Pictures, under the direction of Francis D. Sutherland.

In May 1908 Reed’s American Bioscope became Reed & Brown’s Anglo-American Animated Picture Company and they took over the Hall to run it solely as a picture house.

Throughout its surprisingly long life, the Howard Hall does not seem to have adapted that well to its cinematic life, with frequent visits from a worried borough surveyor! Despite redecoration and some improvements it remained a rather basic hall with a flat floor and wooden benches.

The talkies arrived on Christmas Day 1930 with “Innocents of Paris”, starring Maurice Chevalier. It was equipped with a British Talking Pictures(BTP) sound system. By this time Howard Hall Cinema was owned by Shipcote & Company, and managed by Tyne Picture Houses Ltd. The proscenium was 30ft wide.

Howard Hall survived into the 1950’s, when it was clear it was not worth making the repairs and improvements that were becoming increasingly necessary. It closed on 4th August 1956 with “Secret Beyond the Door”, starring Joan Bennett and Michael Redgrave, supported by Reed Hadley and Marjorie Reynolds in “Mobs Incorporated”.

The building was subsequently demolished. The site was initially used as a car park, but it appears to have since been lost to housing.