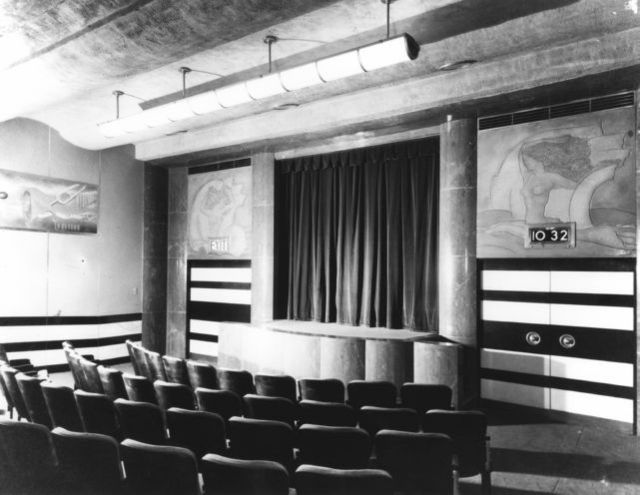 With Alfred Fellheimer and Stuart Wagner as architects, the tiny Newsreel Theatre was part of one of the last of the great American railroad stations, the Cincinnati Union Terminal, an Art Deco style masterpiece which opened in March, 1933, and remained in service for only 39 years.

Its plush, over-sized seats provided travelers with a comfortable way to spend time waiting between trains by watching an hour’s program of newsreels and short subjects. The terminal stills stands, converted into the Cincinnati Museum Center.

The theatre is restored and part of the Museum Center at Union Station in Cincinnati. Last time I was there they showed old newsreels and the occasional historic presentation about the train station. BTW, for architecture fans, the Rookwood Tea room (the theatre’s counterpart on the other side of the massive rotunda and lobby)is also intact. Only the concourse of the train station is gone (but the giant mosaics live on at the Cincinnati/Northern Kentucky airport.

Some other newsreel and short subject cinemas located in train stations:

The 100-seat Newsreel Theatre is operational as of this posting date. The Museum Center (formerly Union Terminal) shows informational videos about the offerings of the Center. In March 2005, Cincinnati World Cinema presented the PaddleFest Film Festival, 18 short films shown in three sessions, depicting white-water and travel kayaking. The event was held in conjunction with a Paddling and environmental exposition; the screenings were sold out.

Prior to that screening, Cincinnati World Cinema presented a Latino film festival back in ‘02, in conjunction with the Latin-American Culture Fest.

“Film” presentation is tenuous at best, as all they have is an old LCD projector with a failing bulb.

A newspaper item from March 1933 lists Willis Vance as in charge of the Newsreel Th. which seats 118 . Showings should last one hour ,Willis also runs the Latonia Theater in Covington,Kentucky .

Although it does not seem to be used any longer the entrance and box office for Newsreel theater at Union Terminal(The Museum Center) is still standing in the rotunda lobby.

The two linoleum murals on either side of the curtained area in the picture which heads this site disappeared when the Museum Center opened. Never to be seen again. So sad, fortunately other linoleum wall murals still exist in the outer areas on the corridor which heads to the waiting room of the womens rest room.

And If You Can See The Sign Well Enough, This Theater Was Previously Known As The Terminal Theatre For Some Reason.

Terminal Theatre was formerly a Newsreel Th. during World War Two in the 1940’s. One half hour shows as you waited for your next train connection. Later with our museum center conversion it again became a screening room for events and upcoming exhibits. I believe it is currently vacant!