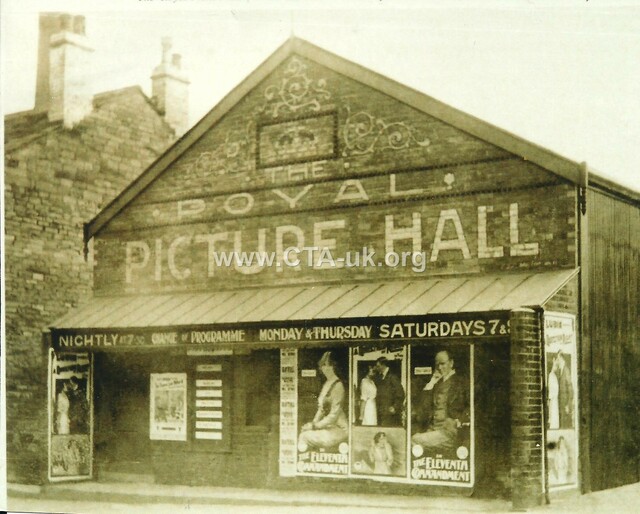 In the Stanningley district of Leeds, the Royal Picture Hall was opened on Monday 6th March 1911 by Councillor B. B. Cockshott, chairman of Farsley Urban District Council. Farsley Brass Band “played lively tunes” to entertain the dignitaries and guests.

The Royal Picture Hall was initially operated by J. Austin and Simeon Barnes. By 1923 it was being run by “Barnes and Taylor”, presumably Simeon Barnes with a new business partner. Mr Barnes was the manager, and there were two shows nightly.

According to ‘Leeds Cinemas Remembered’, the Royal Picture Hall closed on Saturday 14th November 1931 with “Show of Shows”, starring Frank Fay. However, the Kinematograph Year Book for 1932 lists a Royal Cinema, on Bradford Road, with an Electrocord sound system. As “Show of Shows” was a sound film, and it seems very unlikely that the Royal Picture Hall would install sound, only to close down, it could be assumed that it did close down, but was then re-opened. (‘Leeds Cinemas Remembered’ does not list another Royal Cinema.)

The ‘new’ Royal Cinema was owned by Films (Leeds) Ltd. - but still had a relatively short life, with the Kinematograph Year Book for 1938 listing it as “Closed”.

By the 1980’s the premises were in use as a car showroom. However, it is assumed that, more recently, they have been lost to area redevelopment.