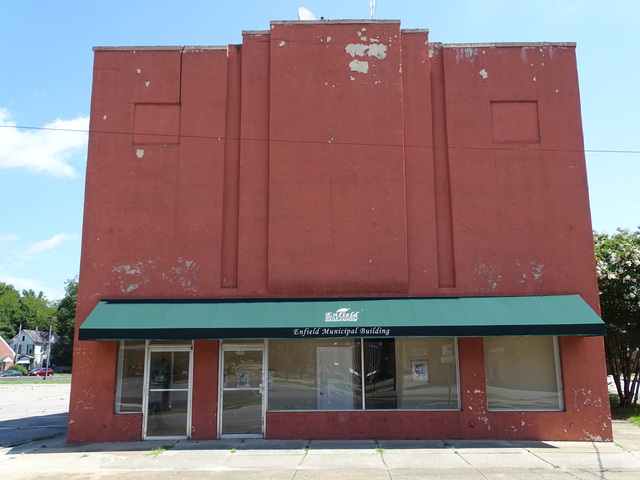 This theatre is a modest streamline structure located on the corner across from ‘downtown’. It’s not clear when it was constructed, but the 1921 map shows a house on this corner. The style would indicate sometime around 1940. It was operating as the Enfield Theatre by 1938. By 1940 it had been renamed Levon Theatre.

The one oddity is that due to the angle of the intersection, the front is not aligned 90 degrees with the side walls.

The Levon Theatre was still open in 1957. It has been long closed, and the marquee has been removed. Plate glass now covers the ground floor, and the interior appears to have been chopped up into offices, which are shared by the city and the local community college.

The draft of the NRHP application for the Enfield Historic District (PDF here) dates the building at 200 Whitfield Street to 1949, the year it appears in County tax records, and says that it was probably built as a movie theater, though it doesn’t mention the theater name. Interestingly, the document says that the Levon Theatre was in a building at 114 Whitfield Street which had been occupied by the Randolph Store in the 1930s and became the location of a law firm in 1948. The Levon must have moved to 200 Whitfield in 1948, and then the law firm took over the newly vacant space at 114.

Thanks for finding the draft. Took a quick look for NRHP listings and didn’t see one.

I noticed that the draft itself is dated 5/12/21, so is quite new. If it hasn’t been submitted to the NRHP yet, the authors would probably appreciate knowing that this building housed the Levon Theatre, since they appear to be unaware of that.