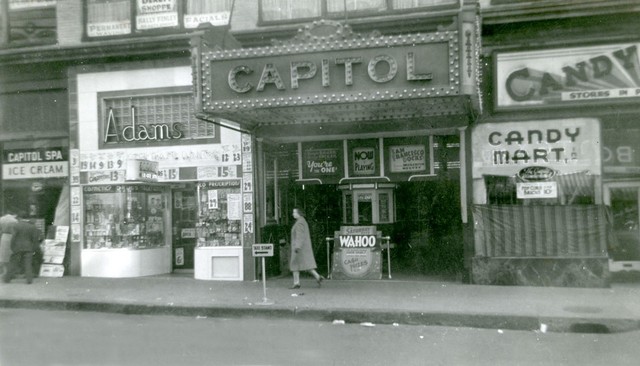 Located next to the Pawtucket River in downtown Pawtucket, this opened as the State Theatre. By 1926 it had been taken over by the E.M. Loew’s chain and renamed Capitol Theatre. In 1948 it was remodelled to the plans of architectural firm William Riseman Associates and was renamed E.M. Loew’s Center Theatre. It closed in the 1950’s and was razed after that.

I remember going to the Capitol to see the serial “Green Hornet” (we then called them “chapter pictures”) and received a free comic book, which I treasured. The Capitol became “declasse” a short time later, and I was not allowed to go there. But one of my favorite family stories (all true) involves my dear grandmother winning a LIVE turkey at the Capitol and taking it home with her on the bus!! (None of us had cars in those days.)

The E.M. Loew circuit had the Capitol remodeled and renamed it the Center Theatre in 1948. An article about the project, which was designed by William Riseman Associates, appeared in Boxoffice Magazine, July 17, 1948. There was also a nice night photo of the new marquee of the Center on the cover of that issue of Boxoffice.

Joe,
That is an excellent piece you’ve posted a link to. I believe it contains the only known photos of Pawtucket’s Loew’s Capitol/Center Theatre.

Ad for a stage show at the State Theatre in 1926.
CHICK CHICK

Burlesque wasn’t frowned upon at that time in Providence, just five miles away:
1921
1929
Perhaps it was a Pawtucket hang-up.

Tinseltoes- Yes, E.M. Loew had no blood relation to Marcus Loew, who was a generation older. His theaters almost always had “E.M. Loew” in the heading rather than just “Loew” in order to avoid confusion.

The Theatre Historical Society archive has the MGM Theatre Report for this theater when it was the Capitol. Address was “Main Street”. There is an exterior photo shot May 1941. The condition is Fair; the theater was over 15 years old, and not showing MGM films. There were 800 seats on the main floor and 450 in the balcony; total 1,250 seats.