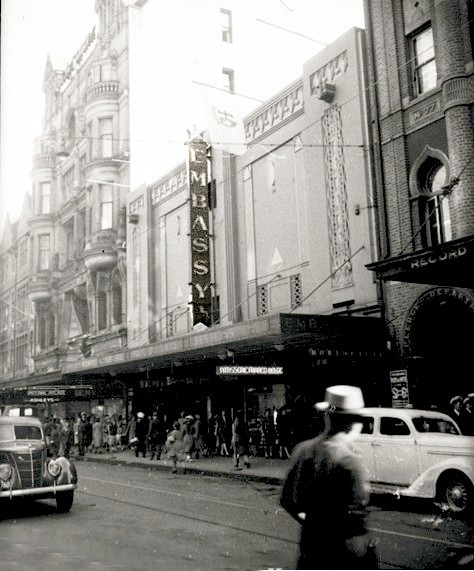 This delightful addition to the Sydney city theatres was built on the site of the old Tivoli Theatre that was demolished in 1929. Designed by William Thomas Leighton working out of the office of Charles Bohringer, and built by J. Marron it opened its doors on the upmarket Castlereagh Street on June 1, 1934. Located across the street from the rear entrance to MGM’s flagship theatre, the St.James Theatre and 100 yards from the Mayfair Theatre. Being in the heart of the shopping district, slightly removed from the main area of the movie palaces it relied heavily on shoppers throughout the day and hotel residents in the evenings. The theatre was owned equally by Union Theatres and Hoyts Theatres but being run by Hoyts.

Its opening attraction was Charles Laughton in “Private Life of Henry VIII” and throughout its life continued to be an outlet for mostly British product quite often films from Union Theatres' distribution arm B.E.F. This policy was retained into the 1960’s and 1970’s when it tended to play popular films that required a more intimate setting or films that had a limited audience. Being close to some big road show theatres it tended to pick up some of their overflow customers and remained successful to the end.

The facade was relatively plain with a few Art Deco style details and half of the frontage was taken up with two shops. One shop being a famous jewellery store. The Embassy Theatre had an outer foyer open to the street, featuring a large bas-relief “The Ambassadors” a Roman scene under which were the five sets of glass and chrome entrance doors. These led into the box office area, complete with a central ticket booth, candy counter and straight into the rear stalls. The dress circle was reached through wide stairs with elaborate chrome balustrades to the right.

The Embassy Theatre was decorated throughout in an enthusiastic geometric Art Deco style, with lavish use of metal leaf and reflective surfaces. There were heavy wooden doors throughout with Art Deco style marquetry covering them. Sunburst light fittings, chrome work, comfy armchair seating in the dress circle and overall a cosy elegant feeling rather than stark and awkward like some deco theatres. The elaborate auditorium light fittings were removed during the war and replaced with safer indirect fixtures. On the whole the Embassy Theatre retained this refined and elegant feeling throughout its life and was maintained to a high standard. The only major changes the theatre seems to have had throughout its career was the added comfort of air conditioning and then CinemaScope, which fitted handsomely behind its crimson, drapes that were backed up with a second set of silver satins.

Its demise happened very quickly and went virtually unnoticed. Hoyt’s were shedding all their old theatres to embrace the concrete box. Greater Union were having financial problems and did not want another theatre in the city. It was mutually agreed to sell the property. It was stripped and then left with a ‘For Sale’ sign for two years. Finally it was short leased to an up market shoe store. Hidden behind temporary inner walls and a new facade it was forgotten until it was finally torn down and an expensive shopping arcade built in its place.

I remmebr going to the Embassy in the 60s. It was where A Hard Days Night was shown. I think it was also where the second Beatles movie, Help, was shown.

I live in the USA and I was on R&R in Sydney in 1970 and saw M.A.S.H. at the Embassy. I guess I picked that film because I was in a MASH type unit in Vietnam. I enjoyed Sydney and its very friendly folks.

While it’s true that ‘A Hard Day’s Night’ screened at the Embassy, the Beatles' second film ‘Help!’ actually screened simultaneously at the ‘Palace’ and ‘Town’ theatres in Pitt Street.

One of my favourite Sydney city theatres, I remember seeing the now classic Australian film, “Wake in Fright” there as well as “Straw Dogs” even though my friend and I were not quite 18 at the time. When I worked at United Artists in 1974, Pasolini’s “Canterbury Tales” played there. What a strange movie that was!