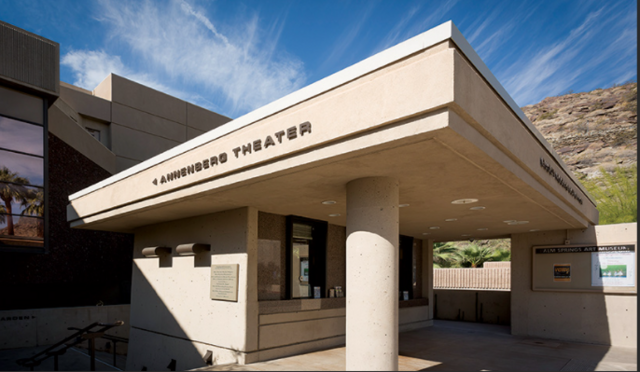 The Palm Spring Art Museum, founded as the Palm Springs Desert Museum in 1938, moved to its present location in 1958. The new museum and the 430-seat Annenberg Theater, named after Walter and Leonore Annenberg, opened January 24, 1976. The $5.5 million museum and performing arts theater was designed by E. Stewart Williams in a style that has become known as Desert Modern.

A January 1992 festival highlight was an interview with 84-year-old James Stewart by Charles Champlin of the Los Angeles Times, followed by Stewart’s 1951 film “Harvey”. There were six other James Stewart classics at the festival that year and looking back the first Stewart film to screen at the Annenberg was “How The West Was Won” in 1985.

From 2013-18 the Annenberg hosted free Thursday night movies for three summer months. Some of the films were “Young Frankenstein! and "Do The Right Thing”, with other favorite films screened throughout the year.

Every year in-person awards are given on the first night for recent work but this year’s ceremony, usually attended by 2,500, was also canceled with the event to be covered by Entertainment Tonight on January 14, 2022. Nicole Kidman was honored with a Career Achievement Award for the film “Being the Ricardos”. In March 2015 at the Annenberg Theater Lucie Arnaz screened her film “Lucy & Desi: A Home Movie”, followed by her reminiscences.

Not only for films, scheduled for later in January 2022 at the Annenberg Theater was Cindy William’s one-woman show “Me, Myself & Shirley”, which is part of her nationwide tour.