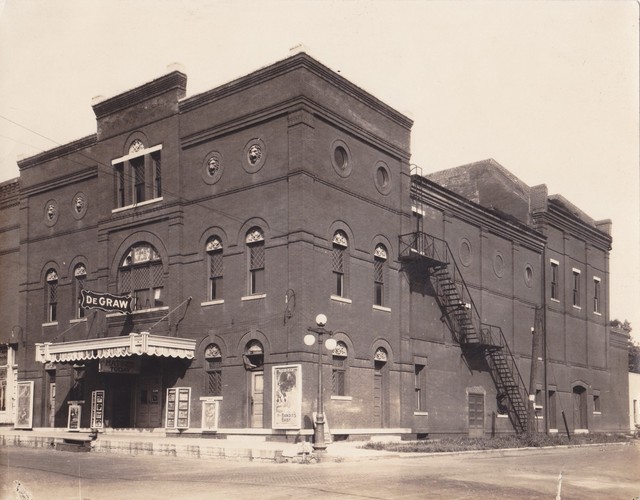 Opened in 1905 as the Degraw Opera House seating 1,108. It was designed by the Boller Bros. A large theatre for a small town. Impressive front façade with a Spanish Revival style.

When the theatre was remodeled in 1958 the entire front was covered over with wavy panels in white on the outside and down the middle with red and white. It was renamed the Lains Cinema with large letter in neon placed in the front red and white panels.

In 1985 the theatre changed hands again and the new owners brutalized the theatre. Covered all the Spanish décor in lobby, balcony and main auditorium. Everything was painted a drab burnt red color with white trim. At this time it was renamed again becoming the Cedar Cinema which changed the sign on the front of the building again. Of the 1,108 seats 502 were in the large balcony.

In the beginning the proscenium arch round the stage area was done in gold leaf. The columns that once graced the auditorium walls with the marble effect were all painted over in the gawdy red with white trim during its last remodel. The theatre quietly closed its doors for good in 1998.

It was converted into a discotheque, but had closed and was demolished by April 2005.