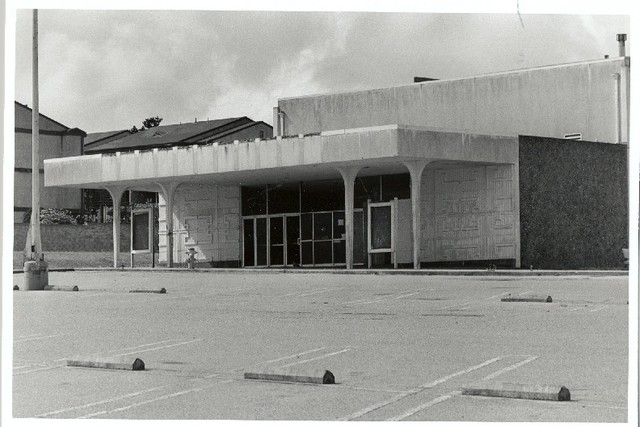 This was a theater that opened June 29, 1966 in a shopping center that existed during through 1984, at the intersection of Sharp Park Road and Skyline Boulevard. The theater played first run movies through the 1970’s, then began showing B-films such as “Pom Pom Girls” and “The Van” during the late-1970’s. Also had midnite movies…“Rocky Horror Picture Show”, “The Grateful Dead Movie” and “The Song Remains the Same”.

The theater closed in 1980 and building had a fire in the early-1980’s. The entire shopping center was demolished for an apartment complex.

I remember when this place opened…..So much nicer than the SeaVue….and after the movie, you could go to Thrifty Drugs in another part of the shopping center and get nickel ice cream cones.

Good night! I happened upon this by sheer accident. Larry Goldsmith hired me back in 1973 I worked there after Fox sold it. unreal great days great times. Loretta was a cashier and seen Rocky where it was playing in Millbrae 6 times

I was kid when this was built. First Safeway, the little restaurant the liquor store the barber shop the dry cleaner I worked there to, Ben Franklin, the theater and THRIFTY where you could get five scoops of ice cream for a quarter

There was Bert who had to walked away from the ticket stand because he had bad gas. at 19 he drove a Lincoln Continental. Richard was the UNION projectionist. he taught me how to run that arc projector. I use to dump popcorn on my friends in the back row from the projection booth.

I had so many pictures from movies and posters. I accidentally threw them away. I could retire 10 Years ago if I had them still.

unclemaui…..I am Larry Goldsmith, sure would like to know what your name is to see if I remember you..I left there when Mann Theatres leased it out to an independent.

Mark Menzies, You hired me back then when Loretta was a cashier, and Bert the ticket guy/ candy counter there was one more guy but I cannot remember his name or the other cashier. I cannot remember the Janitors nick name anymore. Richard was the projectionist 2 days a week Lindsey 5 days a week. Too long ago to be exacting. when you left They brought the manager from the Fox Parkside on Taraval street. We were all scared of her. before her arrival at the Skyline I was sent to THE PARKSIDE for the GRAND opening of The Poseidon Adventure, Rumors were she was hard to work for. then a guy from Sacramento managed it. he went back to run the Fox Thunderbird drive-in,in Rancho Cordova. Fox Skyline theater was sold to a guy who tried to run it. His first day open they were robbed. Things got tough he started 99 cent movies. It was hard keeping liquor and marijuana out of the place. Remember you use to be able to smoke? :) no cigars though :) My family went to the Fox Skyline the first weeks it opened showing STAGECOACH. I can still remember getting on the wet slippery fog covered walkway to the change the movie titles.

To this day March 5, 2017 I repeat the time of day. If it has 15 or 50 7:15, fifteen, ONE FIVE or 7:50, fifty, five zero. I still remember the angry looks on patrons faces when they realize the movie has started or they are too early. :) I remember you came by at least once after you moved on.

Good to hear from you, many moons have passed. Mark

Hey Mark….Good to hear from you..Always wondered who unclemaui was! You are thinking of Lorinda Knight, who was always box office. Also, Laura Martinez, Mark Jagger, Mark Frey and Esther Fielding, asst. mgr to me.Esther passed away a couple years ago of cancer. Her son was convicted of murdering the wife of a prominent SF attorney’s wife. Gus Frias and Tracey were the janitors…

I left there for 1 year but returned. I was there til 1975. The 99 cent policy was started just before I left.

Mann Theatres tried to transfer me to Tower Theatre in EAST OAKLAND! I refused to go there, but could not stay at the Fox Skyline because Mann had leased it to a independent.

The manager you are thinking of from the Parkside was Jo Ann Brown…she was the mgr of the Skyline before I came there…No, she was not easy to get along with..She disappeard after Mann closed the Parkside.

How I miss those days! I ended up going to work at Sequoia Hospital….there for 19 years before we moved to Reno to open an assisted living facility here. We sold that after being there for 21 years…..Where are you now and what’s going on in your life??? I remember you so well! Still blonde after all these years?

Hey Mitch, just saw this! ..Wondered what happened to you.