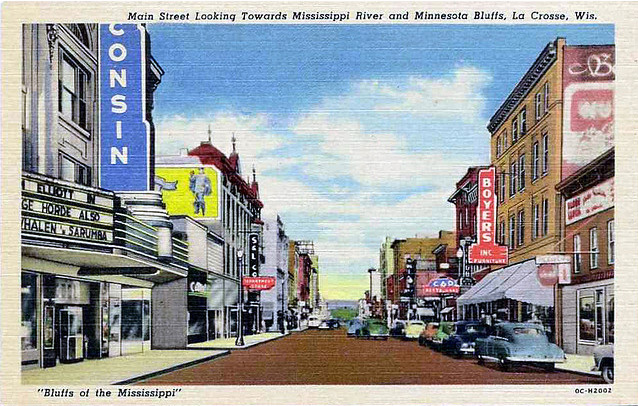 Originally opening about 1910, the Majestic Theatre was primarily a vaudeville house. After the demise of vaudeville, it was used primarily as a movie house.

In 1936, the theatre was completely remodeled and renamed the Wisconsin Theatre. With this change came a significant number of improvements. Trane air-conditioning, Perfect Posture air cushioned chairs, and the latest in Western Electric sound systems. For the ladies, “an exquisite powder puff room”. A local newspaper article on the 1936 remodeling mentions a 58 foot high neon sign on the building, and a lobby trimmed in carrara glass with colored terrazzo marble floor of a modernistic design. The main lounge, powder room, and offices were accessible by two circular staircases located at either end of the main foyer which extended the entire width of the building. The architect for the 1936 remodeling was Perry E. Crosier of Minneapolis. The theatre was owned by the La Crosse Theatres company and reopened on September 19, 1936 with Fredric March in “Anthony Adverse”.

Just prior to World War II, the house appears to have been showing quite a number of westerns.

Sadly, the auditorium of the theatre was destroyed by fire in 1952. The office building, store fronts, box office and front canopy remained for a time.

Contributed by A. Dinger
Get Movie Tickets & Showtimes

Fire believed to have started in the projection booth early Sunday morning destroyed the Wisconsin Theatre at La Crosse. Firemen are shown pouring water on the $100,000 blaze after the roof and one wall had collapsed. The fire occurred in near-zero weather.

A fire that raged for more than two hours Sunday reduced the 43-year-old Wisconsin Theater in downtown La Crosse to a battered shell. The fire traveled from the rear of the theater to the front. Shortly after the blaze began, the theater’s rear wall collapsed, firemen ripped down the side walls which were tottering. All of the city’s fire fighting equipment was called out to control the blaze. Two firemen were overcome by smoke and were hospitalized.

Damage was estimated unofficially at more than $100,000. The theater was built in 1909 and was first known as the Majestic. It was converted from a vaudeville theater into a motion picture house recently and was renamed.

A postcard view of downtown La Crosse from 1950 looking down Main Street toward the Mississippi River. On the left is a partial view of the Wisconsin Theatre. The feature movie is “The Savage Horde” starring “Wild” Bill Elliott.

my father, florian c. heintz, got his start as a professional musician at the wisconsin theater in 1936. then, he was a 17 year old aquinas student, known to be a talented tenor sax player. when a visiting vaudeville show came to town, short one saxophonist, he was asked to sit in at the wisconsin. >> it was called: “vic binn’s broadway review” and featured the new miss america. >>> upon the end of run, dad was hired to join the troupe, traveling the country and ending in new york.>> though still in school, his family allowed him to go because, during the great depression, his $5 weekly salary was quite good. he promised to send $2.50 home every week to support the family and finish high school in the summer. >>> years later, he was back in la crosse with a wife and family. in the mid fifties, he worked as a decorator at boyer furniture store across the street. a little boy at that time, i recall seeing the theatre in ruins, standing for a number of years before demolition.

During the early morning hours of Dec. 28, 1952, the Wisconsin Theater at 514-520 Main St. in La Crosse was destroyed by a spectacular fire. Thanks to the efforts of the La Crosse Fire Department and a firewall in the theater’s auditorium, the offices and apartments that occupied the front of the building were spared extensive damage and no lives were lost. Two firemen had to be hospitalized during the blaze.

The Wisconsin Theater was originally known as the Majestic Theater when it opened Jan. 3, 1910, as a vaudeville house. Frank Schwalbe and Peter Newburg were the original owners.

The Majestic had a seating capacity of 800, with 700 seats on the main floor and 100 in the balcony. Steel and asbestos was used in the construction of the theater for fireproofing. The massive stage curtain was also laced with asbestos.

The interior design work was done by the Odin J. Oyen Co. of La Crosse. Alex Soderberg, an artist working for Oyen, painted a large mural in the theater that symbolized a comedy, tragedy and musical stage performance.

The basement of the Majestic Theater contained a large four-boiler steam heating system. Each chair in the theater had a small heating vent beneath it.

In the early 1920s, the majestic began showing the new silent movies. By the late 1920s, the theater was showing motion pictures with sound.

It wasn’t long before the La Crosse Theater Company, which managed the Majestic, realized that motion pictures were replacing vaudeville as entertainment for the masses.

So a significant remodeling of the Majestic began in early 1936 under the direction of Minneapolis architect Perry E. Crosier. It was soon decided that the name of the theater would be changed to the Wisconsin Theater.

Among the improvements made in the 1936 remodel was an increase in seating capacity from 800 to 1,100. A firewall was also installed at this time. A brand new marquee was installed and featured a 58-foot tall “Wisconsin” sign, which was built by the Electrolite Sign Co. of Milwaukee.

The former site of the theater is now occupied by a parking lot located just west of St. Joseph the Workman Cathedral.

The theatre was briefly mentioned on episode of American Pickers(showing a picture of the theatre, then called Majestic Theatre). The guy they talked to said the site is now a carpark!!

This reopened as the Wisconsin theatre on September 19th, 1936 Grand opening ad posted. 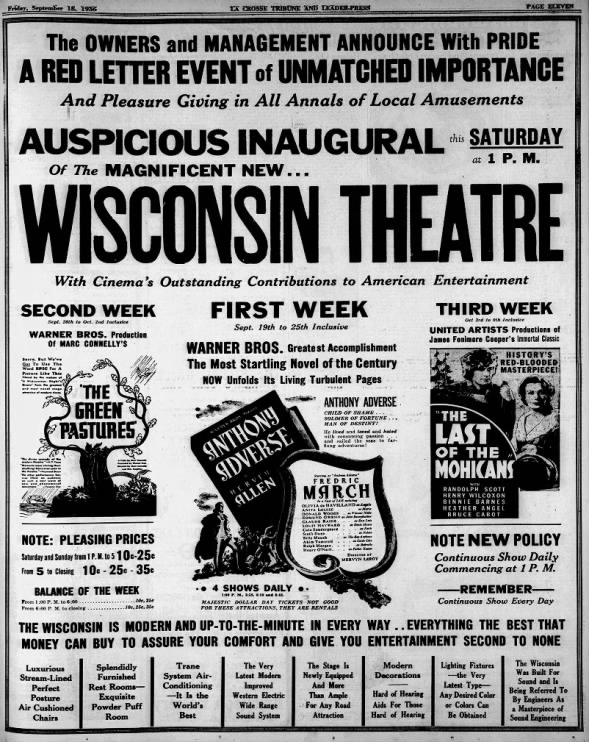