The Bridge Creek 8 was opened by Rand Theatres chain in January 1989 in the Bridge Creek Shopping Center seating 2,650. Two auditoriums were certified for THX sound.

There was a big mystery surrounding this theatre. The theatre closed abruptly in September 1989, nine months after it opened, with the equpipment removed and a statement that the theatre would reopen shortly as a discount theatre. That never happened and the owner was arrested later on 61 counts of bank fraud, conspiracy, income tax evasion and other counts in regards to the loans he had made for the theatres he built in Texas and Tennessee. The equipment that was put up as collateral for the locations was not located since he had removed it and apparantly sold it.

The bank closed on the Bridge Creek property and the Victory Christian Church moved into the building and has been there since.

I can tell you i was working at the bridge creek 8 as a projectionist
on the last day of operation you see none of us knew what was going on i was upstairs at my desk when an irs agents entered the booth and told us that the theatre was closed right then and there i was asked to shut off the projectors and asked to leave i never even got my final paycheck. But what made this theatre so good to work at was one thing and that was every week to get our invetory upstairs into the room where it was kept all we had to do was place it on a big lift that came out of the roof in a big storage room once the lift took it up that is where it was moved off the lift and stored in that very same room. Also was a big big popper that was used in that room also and all we had to do to get popcorn down stairs was open a cute and in fell into a big wormer down stairs for conncession to use. No popcorn was ever popped downstairs. This theatre was equiped with christie projection lamp houses&platters and century heads. Amps were i believe JBL along with the speakers and kintex sound processors.

Austin’s Bridge Creek 8 Theater represented the Rand Theatre Circuit of Little Rock as well as any other location in its crash-and-burn portfolio. Rand used his 100-plus dubiously-located theatre screen portfolio to convince investors that multiplexes were the place to be.

Like many of the locations, the Bridge Creek 8 was in a less than ideal location with poor visibility making the start-up more cost effective. The nondescript 8-plex began raising eyebrows not long after it opened. Creative bookkeeping, rent-free negotiations for the launch months, questionable THX claims, newspaper ads perhaps not paid for, overages on seating charges were just the start of the troubles.

Riding the box office receipts and associated concessions with hits such as “Batman” might get the Rand through their creative bookkeeping such as at the Bridge Creek. That is until the studios questioned Rand’s box office figures and slow pay. They stopped the flow of hits to the Bridge Creek and any momentum was lost. Bookings became curious from independent studios no longer in existence.

The scheme was finally brought to light at the Rand’s San Antonio location. It didn’t take long for the feds to make an ill-fated raid on the Austin location and others in Texas. The entire Rand operation was auctioned off in 1990. This location became a non-profit church to help reduce the significant taxing burdens it and other locations faced as contemporary buildings in otherwise challenging retail zoned areas.

This opened on November 18th, 1989. Grand opening ad in the photo section. 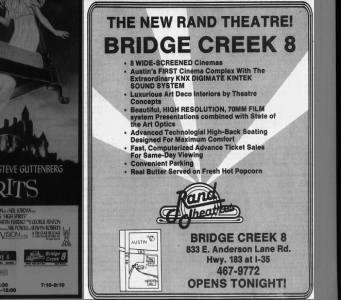 Article about its closing: 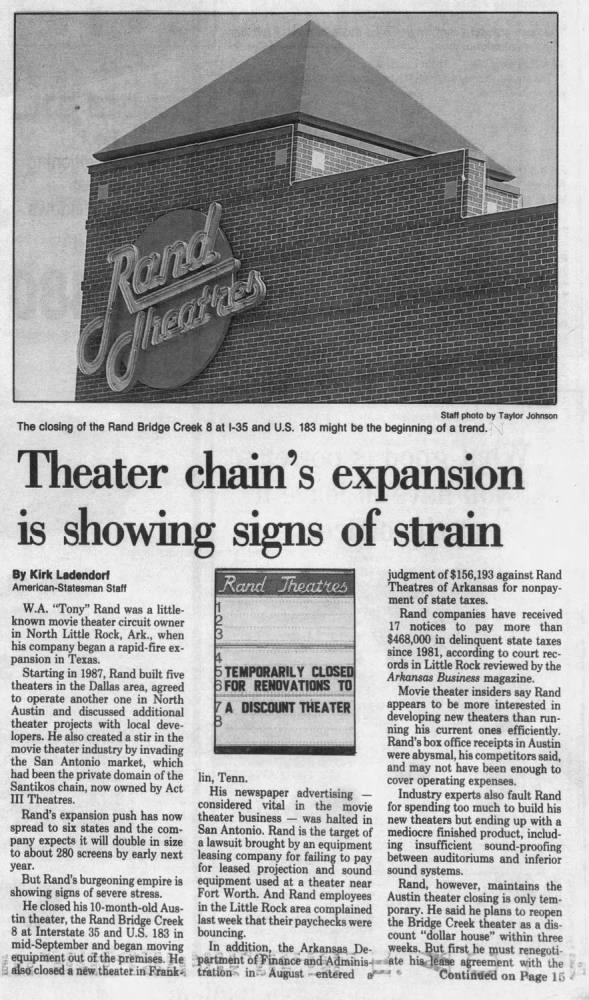 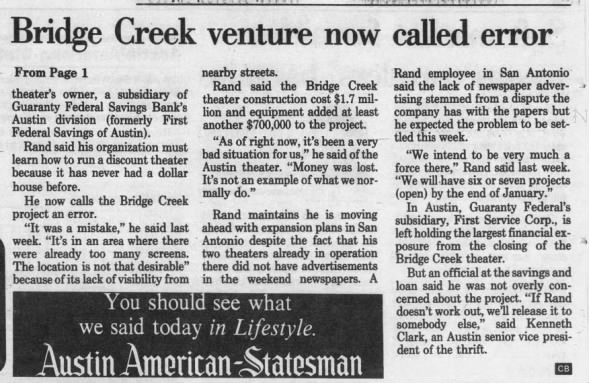