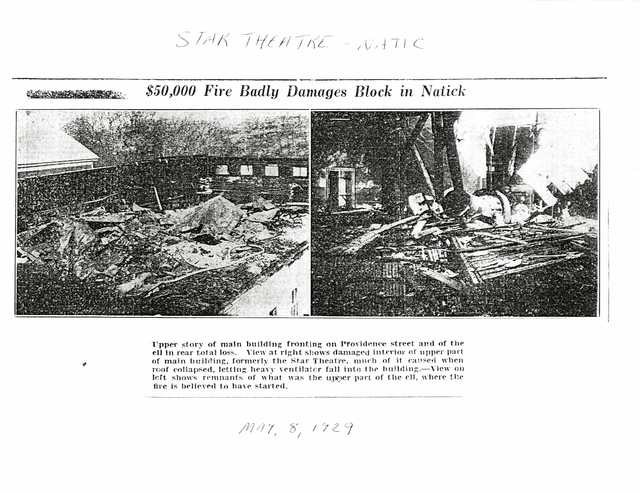 A 1927 city directory lists four town theatres: Majestic, Gem, Palace, Thornton’s. I have found newspaper ads for all except the Majestic and for this theatre, the Star, listed in 1928.

The building that housed the Star seems still to exist. It is a residence at what is now 614 Providence Street, right next to the Pawtuxet River and the bridge which crosses it. Looking at the residence, you can see that it has an odd shape, more like a former social hall of some kind than a place originally meant to be a home. It is here that the Star Theatre must have been located, though I consider that an educated guess.

I have no idea when it opened or how long it operated. The village of Natick actually straddles the border of two municipalities, Warwick and West Warwick, on opposite sides of Providence Street. The former theatre was on the West Warwick side.

Here is the residence located where the Star Theatre used to be. It is adjacent to the Natick Bridge over the Pawtuxet River and close to a waterfall. (Another R.I. theatre near a waterfall is the Assembly Theatre in Burrillville.) It is now an 8-unit apartment building. The address is 610 Providence Street. Looking at the building, one can tell by its shape and size that it was some kind of social hall at one time, and the Star Theatre may have been one of its temporary functions. Apart from the clear city directory reference, there is no other evidence I could find about the place as a cinema, no newspaper ads, nothing. But a small village cinema of this type, perhaps part-time in nature, may have relied on window flyers and leaflets to publicize shows, much as did the Myrtle Theatre in the village of Thornton in Johnston.

Here is an ad that appeared in the 1911 Pawtuxet Valley business directory for the Royal Theatre, William Brown, proprietor. I am confused by this, because the ad says Natick, whereas the listing on another page is coded “RP” -which means Riverpoint-, and the address is given as Main Street, “next to Iron Bridge,” Daily’s Block. Could Riverpoint have been considered part of Natick? Was this Royal the same as the Star? Different? In the same spot? Was Providence Street ever known as Main Street? Was “Iron Bridge” the bridge over Providence Street in what is now Natick or does it refer to the one on Main Street in Riverpoint? (Providence Street didn’t seen to be a street name at the time.) If it was in Riverpoint, why would someone have built a movie theatre just a few doors down from Thornton’s?

An item in the Providence News, May 8, 1920, refers to the Star Theatre in Natick:
[i]Moose to Show Films
Warwick Lodge, No. 996, Loyal Order of Moose, of Arctic, is making plans to exhibit four reels of moving pictures at the Star Theatre, Natick, on next Wednesday evening. These pictures were taken in and about Mooseheart, sand will be explained by District Supervisor N. Waldo Kennedy of Providence. It is planned to show these pictures free of charge to the people in Natick.[/i]

I am starting to do some research on the Star! I found today in the 1917 Business Directory for the Natick village of West Warwick,it states as follows: Star Theatre moving pictures Main Street Natick and that is it. The next book that I could get information from was 1927 and the Star Theatre was not listed. I’m trying to find and article that I have stating that the Star was vacant for some time and the building collapsed! When I find it, I will tell you more. How do I put pictures in this comment section! I have some to share! Brian Have a nice day!

The Star Theatre was on Main Street which leads into Providence Street in the Natick village of West Warwick.

Riverpoint is a separate village in West Warwick, also on Main Street. This main street passes through many tiny villages in the present West Warwick area. If you are looking for information after 1913. Before 1913, Natick was in the City of Warwick, Rhode Island. The Thornton’s Theatre is in Riverpoint or sometimes called Clyde Village, but it is in Riverpoint, they lead into one another. The same thing before 1913 it was located in Warwick. After that it was part of a new town called West Warwick, Rhode Island. Due to political fighting the western part of the City of Warwick split and became a new town called West Warwick in 1913. If you are not from here you will get confused. I hope that this helps you! My name is Brian. If you have questions for me just ask! Happy to help anyone out!

Brian (bgcivilwar), I am enjoying your comments. To post pictures, put your photos on a server (like Photobucket) and just provide a link on this page to the appropriate photo on your server.

To: Gerald A. DeLuca

Hello sir, Can I e-mail you some super photographs and then you can place them on this webpage for me? I am not that good with computers! I have some super nice stuff to share with all concerned! The Odeon, The Majestic, The Place and Playhouse, Thornton’s and the rare Star Theatre.

Thank you! Brian Edmund Guiot – Local Historian E-mail me at

The Star and the Royal were the same theatre and should be listed as such.