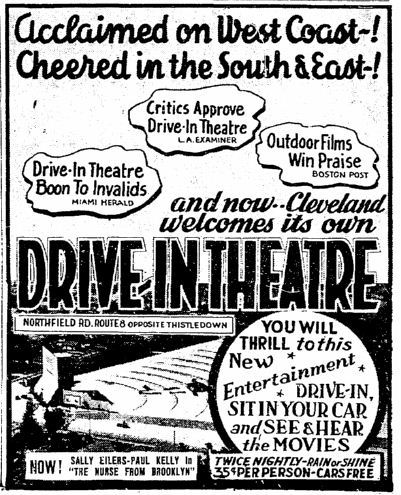 The East Side Drive-In was opened June 5, 1938 with Sally Eilers in “The Nurse From Brooklyn”. It was closed and torn down in 1972. A retail building was later built on the site. The drive-in was across the street from Randall Park Mall (site of the former Randall horse race track).

This should be listed under General Cinema.

This and the West Side Drive-In (and Carousel Lanes, Peter Pan Snack Shop and Amy Joy Donut Shops) were all General Cinema operations in town before they ever built their first indoor theatre here, the Southgate Cinema.

The first occupant of the retail building on the East Side’s site was Giant Tiger – when they went out of business Uncle Bill’s moved in.

General Cinema also had a furniture chain, Alperts, that had a store just down Northfield Road from the East Side drive in. The store was located in a renovated bowling alley and didn’t last too long at that location. The building was worn out by the time they moved in and after a few tries to fix it up, they moved to another location.
Alperts furniture left the Cleveland area in the early 1980’s and for a while, I had the keys to all 3 buildings in the market and from time to time, checked on them to ensure that there was no vandalism. All 3 buildings were sold by 1985.

The furniture store that used to be in a bowling alley was in Warrensville Heights, next to Zayre’s, across the street from Thistledown…first it was Ohio Furniture, then Heilig Meyers, which closed when the entire chain folded in the mid-1990’s. Alperts (the GCC-owned furniture chain) was in a newly constructed building at Miles Ave. and Northfield Road; after Alperts left it became Syms (a discount clothing store), then Sun TV, and after being vacant for several years, is Syms again. I think General Cinema also owned Name Brand Furniture…many Name Brand’s became Alperts.

Thanks for a trip down memory lane. Does anyone recall the tornado that hit the east side drive-in? I think that was the same year that the tornado hit Zenia Ohio.

The Cuyahoga County Auditor shows the parcel of the land of the theatre and then retail to have been owned by GCC until 1997. Not a bad deal to lease drive-in land to people.

my cousin and family lived on Emery Rd. and their backyard gave way to the East Side parking lot and screen……..interesting summer evenings when you’re a kid in the late 50’s/early 60’s