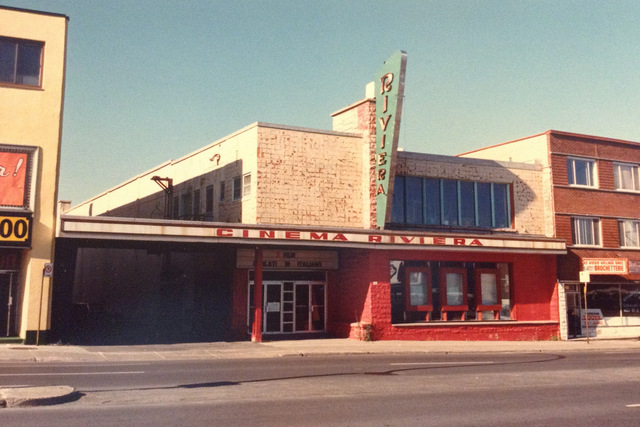 A neighborhood theatre on the outskirts of Montreal. It opened May 30, 1953. It was an Italian-language movie house in the 1980’s before it closed. Today it operates as a live performance adult Solid Gold Showbar.

The theatre opened in 1953 and continued into the mid-1980s. I remember seeing a number of Italian-language films here around that time when a local Italian film presenter used the theatre for that purpose. In August of 1985 I actually went to see E.T.– L'EXTRATERRESTRE, Spielberg’s film dubbed in Italian! I think the small lobby had a small religious grotto with fountain. Does anyone have any further information on this place?

Address correction….should be 8823 Boul. St Laurent, otherwise MapQuest is stumped. As with everything in the province of Quebec these days only the french spelling is acceptable. Go figure.

When the Riviera Theatre opened as an 800-seater at 8820 St Lawrence, north of Cremazie in 1954 it tried to pass itself off as a drive-in theatre. Drive in theatres provided novelty thrills across North America in the 1950s but watching a movie from your car remained impossible in Quebec, as religious authorities worried frisky hands would turn moviegoers into sinners. When drive-ins were finally permitted in the 1970s, the fading gimmick was so popular that the province made an impressive sum in new taxes, surely making them reconsider their ban on potentially profitable things that the religious authorities disapproved of, as I recount in my book Montreal 375 Tales.

Owners put a big drive-in sign on the Riviera marquee, reasoning that it’s sort of like a drive-in, insofar as you can drive to the entrance, let your guests out and then park your car in the big adjacent parking lot. It was a lie of course, as The Riviera was a conventional movie theatre with parking and the Drive In was removed from the signage. The building belonged to the city’s most powerful mob family at the time, the Cotronis. Vic Cotroni’s sister Palmina Puliafito initially rented the theatre out in 1956 to a group headed by Socrates Athanasiou. But those tenants went to court to cancel the 10-year lease after city authorities deemed the bathrooms inadequate (or possibly non-existent). The dispute went to the Supreme Court, which sided against the owners, creating a precedent that remains relevant today.

The Violi-friendly management team would brazenly intimidate any other Italians presenting competing cultural fare, so management’s reputation for kindness was minimal. Paliafito, whose husband died in 1972, lived in a humble home at 8807 Clark and was considered an important impresario nonetheless. The once-pleasant area where the Riviera sat suffered a blow when Highway 40 was built and left the theatre in the shadow of zooming cars and ramps.

Sciarra, who had played dumb at a crime commission hearing, was at the time appealing a sentence for entering Canada illegally for the third time. The killer was believed to be Sebastiano Messina, a Rizzuto loyalist was then shot dead at his cafe on March 10, launching a bloody feud between the Violis and Rizzutos that lasts to this day. The theatre endured as a legit enterprise until around 1988 or so and became The Riviera Palace Bar, then Studio Montreal, hosting such classy acts as Michelle Sweeney for some time in around 1992. The Solid Gold Strip Club took over the premises in 1994 and became one of the first places in town offering the previously-banned lap dances. The building belongs to manager Rejean Pothel.