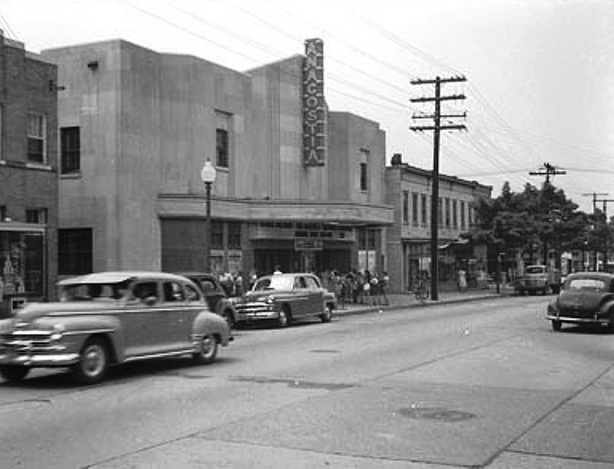 This late John Eberson designed movie house opened on March 1, 1947 with Ginger Rogers in “Magnificent Doll”. It was located in the Anacostia area of Washington. This Streamline Moderne style theater had a fairly brief life, closing in April 1967. A supermarket now operates from the site.

One Sunday recently I searched for the Anacostia. The report the theatre was raized is false. There is a smashed-up pile of rubble, still with 4 walls and a roof, that used to be where folks went to enjoy a show at this once-comfortable neighborhood theatre. The infamous high crime of Anacostia (murder, armed robbery, etc) were hourly occurrances and are not compatable with operating a movie theatre. Washington elected and re-elected the cocaine sniffing and crime-supportive Mayor Marion Barry (D), and until he was removed there was no possibility of peaceful human existance in Anacostia.

The Anacostia Theatre opened on March 1 1947 with Ginger Rogers & David Niven in “Magnificent Doll”. It closed in April 1967.

Does anyone remember the theater located on Pennsylvania ave. S.E. between 27th st. S.E. and 30th st. S.E. ? It was on the right side of the road as you leaving town. By the way rlvjr, you are right on about the mayor.

I found the building that use to be the theater i.m looking for. Its at Pennsylvania ave. and 27th st. SE The front of the building still has the marquee with a sign saying its a child development center. Does anyone remember the name of the theater.

I know the name of the theater now. It was the Highland.

Reading the blogs about the old movie theatres in Washington brings back poignant memories. I lived in southeast Washington as a child (c. 1946-1953), briefly attended Stanton elementary school, and frequented many of the theatres mentioned, most especially the old Naylor on Alabama Ave.

It was at the Naylor that I first saw the old Batman serials (re-runs even then). Only years later did I re-see them as a student at Harvard in the Brattle Cinema off Harvard Sq. The “camp” revival of Batman at the Brattle was to spur the TV series a few years later.

The Cliffie I took to the Brattle was also amused, but not so much as I. You see, she never harbored the hero-worship I had had for Batman and Robin. To see them years later in their cheap dimestore costumes, combating the Yellow Peril (the original was, of course, produced during WWII) was so overwhelmingly hillarious that I fear I lost my cool (de rigeur in the mid-60s as it is now) and guffawed unfashionably throughout the presentation. Well, scratch one ex-Miss Porter’s snot, but so what? The Naylor and the caped crusaders were far more memeorable.