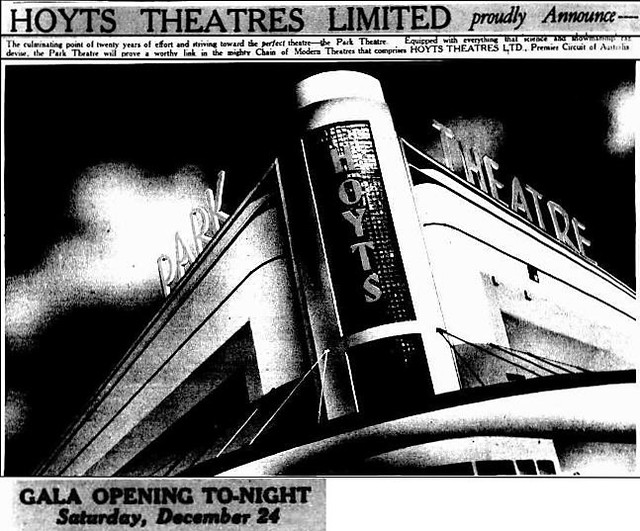 Hoyts Park Theatre was opened at Albert Park, Melbourne, on December 24, 1939 and was the last cinema on this circuit to be constructed with a balcony. From that point in time, any further cinemas were built in the stadium style.

The Hoyts Park Theatre incoporated many features, the most unusual being its “revolving theatre organ”. The organ was a Hammond electronic and was placed in a niche on the right hand side splay wall. When the organ would play, it would simply appear out of nowhere behind gold crushed velvet curtain. It would then revolve back behind the curtain when the show started. It was removed in the early-1950’s.

Other features of this house was the South Sea Bar which was a concession stand based on a Fijian bamboo hut! Sound effects of ocean waves could be heard at the interval! The whole theatre was very stylish and was based on one of Harry Weedon’s Odeon theatres in England. Hoyts Park Theatre was closed in 1962 and has been demolished.

Architects were H.Vivian Taylor and Soilleux and it closed in 1962.